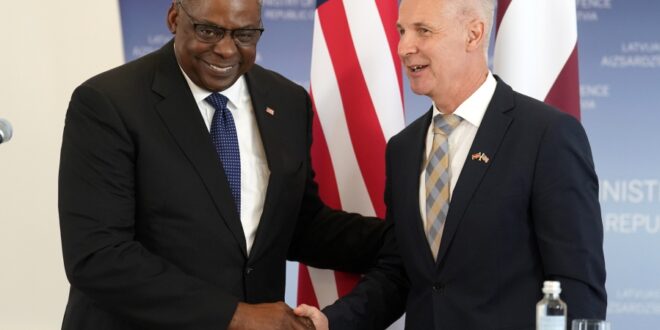 Speaking at a press conference with Latvian Defense Minister Artis Pabriks in Riga, Austin said Washington may also bring in more U.S. troops if needed to bolster the region against any possible threat from Russia.

Austin, who is on a two-day visit to Latvia, said plans to do continuous rotations of forces into the Baltics will likely use troops from U.S. brigades in Romania and other parts of Europe, but “we can also bring in forces from the United States.”

During his visit, Austin repeatedly reemphasized the United States’ commitment to helping the region defend itself.

Austin is the first U.S. defense secretary to visit Latvia in nearly three decades, highlighting the increased importance of the Baltic nations, which sit at Russia’s western edge.

The Pentagon said the last defense chief to go to Latvia was William Perry in 1995.

Pabriks told reporters that his top priorities are to get more U.S. military enablers, adding that, in order to defend his country, his troops need “nitty gritty training” on a daily basis.

He added that Latvia also needs additional financial assistance from Washington in order to buy new military equipment and to beef up its air and coastal defenses.

The three Baltic countries – Latvia, Lithuania and Estonia — are all former Soviet republics that were annexed during World War II . They gained independence with the breakup of the Soviet Union in 1991 and joined NATO in 2004, putting themselves under the military protection of the Western allies.