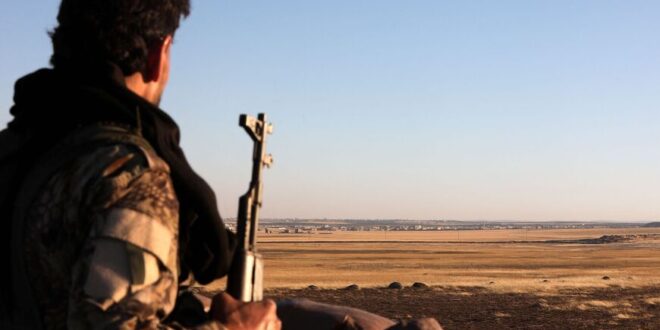 Turkish strikes on Syrian government troops and overt Kurdish attacks on targets inside Turkey signal that both sides are changing the rules of the game as Ankara eyes normalization with Damascus.

Ankara’s reconciliation overtures to Damascus have been accompanied by growing Turkish attacks on Syrian Kurdish and government forces along the border — a sign of new engagement rules in a border strip extending 32 kilometers (20 miles) into northern Syria that President Recep Tayyip Erdogan wants to see as a “safe zone.”

The attacks resonate as a message that Ankara will not tolerate Syrian army positions that amount to indirect cover or support for the Syrian Democratic Forces (SDF) and its main component, the Kurdish People’s Protection Units (YPG), which Turkey insists should be removed from the border strip. The SDF and YPG appear to have changed the rules of the game as well, mounting overt attacks on Turkish border posts and patrols, something they have hitherto avoided.

Erdogan’s talk of fence-mending with Damascus followed his Aug. 5 meeting with Russian President Vladimir Putin in Sochi and Russian capital flows to Turkey. Back in 2016, he had said that Turkey’s military thrust into northern Syria aimed to end the rule of Syrian President Bashar al-Assad, whom he described as a “tyrant wrecking state terror” on his people. Now, Erdogan says the issue for Ankara “is not about defeating or not defeating Assad.”

The issue, he argues, is about the threat of terrorism — a reference to the Syrian Kurdish forces, which Turkey equates with the Kurdistan Workers Party, the armed Kurdish outfit that has fought Ankara since 1984. In remarks to reporters on Aug. 19, Erdogan took a swipe at Washington’s collaboration with the SDF, charging that “the United States and coalition forces have been primarily nourishing terrorism in Syria.” He said he told Putin that Turkey and Russia should step up cooperation “to carry out a fight against terrorism,” and added, “We don’t want to prolong further the process here. We don’t have an eye on Syria’s territory. … The regime should comprehend that.”

Turkey, Erdogan stressed, “is in contact with Russia on every step it takes” in Syria. “We wished to work more efficiently with Iran as well, but this did not materialize,” he added.

Regarding Syria’s future, Erdogan voiced hope that a new “constitution will be drafted as soon as possible and steps will be taken to resolve the grievances of the people.” Recalling that Turkey hosts nearly 4 million Syrian refugees, he said, “The process might be much more auspicious from now on. … Political dialogue or diplomacy between states should never be discarded.” He called for “more advanced steps with Syria,” which, he said, would help “foil many ploys” against Muslim nations in the region.

On the ground, however, Turkey has continued to send military reinforcements to Syria, and Turkish forces and their Syrian rebel allies have stepped up coordinated attacks on Kurdish forces along contact lines in Tal Rifaat, Manbij, Ain al-Issa, Kobani and Tal Tamer. The attacks appear to be Ankara’s reminder that the prospect of peace with Damascus is conditioned on jointly fighting the Kurds. They seem to also be a message that Turkey will continue to target Kurdish forces in the border strip and Damascus should accept that as of today.

Following the accords that put an end to Turkey’s Operation Peace Spring in northeastern Syria in 2019, Turkey had acquiesced to Syrian government forces moving north to the Turkish border as part of understandings with the SDF. But it seems it will no longer accept deployments that serve to camouflage the YPG or SDF presence near the border.

In a staggering sign to that effect, the Turkish military hit a base used by Syrian soldiers in an area west of the Kurdish-populated border town of Kobani on Aug. 16. Three soldiers were killed and six others injured in the strike, according to Syrian sources. Turkey’s Defense Ministry said the strike was a response to a deadly mortar attack on a Turkish border post. Yet, there was no information that the mortar was fired from the base of the Syrian soldiers. That the retaliation targeted the Syrian army rather than the SDF is thought provoking.

Furthermore, a Turkish drone targeted government forces at the Menagh military airport in the north of Aleppo province the following day, reported the Syrian Observatory for Human Rights, with no immediate information about casualties. On Aug. 18, two Syrian soldiers were reportedly wounded in Turkish attacks near Tal Tamer in Hasakah province, a region where Turkish shelling had left another pair of soldiers injured on Aug. 12. In Aleppo alone, the observatory tallies seven Turkish attacks on areas where government and Kurdish forces are both present since July.

As for Kurdish-held areas, the attacks have been akin to a war in recent months, short of only a ground offensive to complete the picture. According to an Aug. 18 report in the Syrian daily Al-Watan, Turkish drones have carried out 52 strikes in SDF-controlled areas this year, killing 53 people, including five civilians, and injuring at least 86.

On the evening of Aug. 18, four girls were killed and 11 others injured while playing volleyball at a UN education center in Hasakah in a drone attack that the de facto Kurdish-led autonomous administration in the region blamed on Turkey. The commander of the US-led coalition forces in Syria and Iraq condemned the attack without naming a perpetrator.

The escalation has seen the SDF extend its firing range toward the Turkish border. On Aug. 8, its media office claimed that 23 Turkish soldiers had been killed in three attacks along the border in the Turkish province of Mardin. There was no statement about casualties from the Turkish side, but it was the first time the SDF claimed responsibility for an attack despite previous exchanges of fire at the border.

In another statement on Aug. 18, the SDF said its forces had taken “a series of efficient actions against the occupying Turkish army in response to its attacks” and vowed to continue to do so. It claimed killing six soldiers near a border outpost in the Turkish province of Sanliurfa, targeting another border outpost in Gaziantep and killing a soldier in an attack on an armored vehicle at the border in Mardin.

On the Turkish side, officials said a soldier was killed and four others injured in the Aug. 16 attack on the border outpost in Sanliurfa. This was the attack to which Turkey responded by bombing the Syrian army base near Kobani. In the second attack claimed by the SDF, mortars landed on an empty field. A mortar attack on the same border outpost in Gaziantep had left a soldier dead and three others wounded on May 12. No casualties were reported in the Aug. 10 attacks at the border in Mardin.

A Kurdish source knowledgeable of the matter told Al-Monitor, “The SDF has for the first time claimed responsibility for retaliatory attacks. There have been exchanges of fire previously, but they would be stopped upon requests from Russia and the international coalition. The SDF has now changed the rules of engagement because the United States and Russia — the guarantors of the 2019 accords — have failed to prevent Turkey’s attacks. This has been the case for about a month.”

Back in 2019, months before Turkey seized control of the northeastern border strip between Tal Abyad and Ras al-Ain in Operation Peace Spring, SDF commander Mazloum Abdi had told a group of journalists in Hasakah, including this author, that a Turkish attack would spark a full-scale war along the entire border. The clashes ultimately remained contained to the targeted region, as had happened in Afrin in 2018. The Kurdish restraint stemmed from concerns over giving Turkey a pretext for an all-out occupation, also reflecting the United States’ breaking influence.