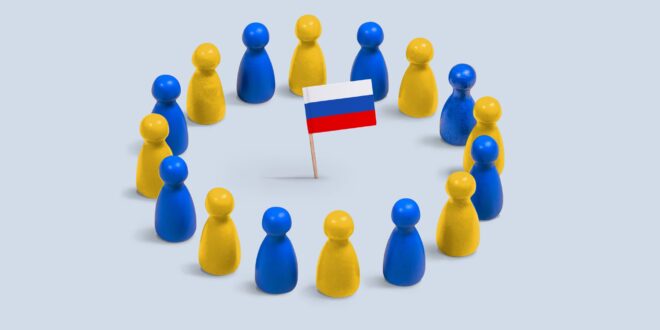 Ukraine Is Waging a New Kind of War

The fight to retake the city of Kherson plays to the Ukrainians’ strengths, not the Russians’.

Ukrainian officials, defending their country against Russian aggressors, began doing something in July that seemed odd, even counterintuitive: They started speaking loudly and regularly about their plans to liberate Kherson—a key southern city that Russia seized only a week after invading Ukraine on February 24. Indeed, the Ukrainians telegraphed their intentions in a way that the Russians could not mistake. This was like waving a red cape at an angry, incompetent bull. Almost immediately, rumors proliferated that the Russians were racing reinforcements to Kherson to prepare for the Ukrainian attack.

Goading the Russians into doing so seems to have been the Ukrainians’ exact goal. Fighting in Kherson plays to Ukrainian strength far more than to the Russians’. Russian occupiers in eastern Ukraine’s Donbas, where the war had been concentrated from April until July, can operate very close to the Russian border, seem to have solidly functional rail lines, and are currently trying to pressure the Ukrainians from two sides at the tip of the fighting around the town of Siversk. Fighting in Kherson, by contrast, nullifies almost all of Russia’s advantages in the Donbas. The Russians are at the edge of their supply lines, while the Ukrainians can maneuver around them. Kherson is deeper into Ukraine than the Donbas, so Russian aircraft have farther to travel to reach the front lines, and that clearly makes them nervous; they prefer to fly mostly over Russia itself or its ally Belarus. Finally, the entire Russian fighting force in Kherson depends for its supplies on just a small number of bridges that span the wide Dnipro River. In recent weeks, the Ukrainians have attacked those crossings almost nightly, severely hindering Russia from moving supplies to their hard-pressed troops in Kherson. The longer the Russians have to fight with limited supplies, the more the battle will turn in Ukraine’s favor.

Though Vladimir Putin had the reputation of a strategic genius when he started this war six months ago, the Ukrainians have exposed him as a plodding and unimaginative thinker who miscalculated enormously. Since then he has resorted to ponderous, unthinking offensives that have secured minimal gains at a very high cost. The Russian army, wildly overrated before the war by military analysts who hailed it as one of the most fast-moving, technologically sophisticated, and powerful in the world, turns out to be profoundly flawed. With ever-changing carousels of generals in charge, it has shown itself to be inflexible, uncreative, and unable to learn.

Ukraine has been on a more impressive trajectory. At the start of the war, the Ukrainians fought a surprisingly strong defensive struggle around Kyiv. Using attacks on Russian logistics and a strategy of denying the Russians access to Ukrainian cities, stringing Russian forces along the roads, and contesting the control of the air, they neutered the Russian drive on Kyiv in just a few weeks. Since then, the Ukrainian military has demonstrated the ability to adapt and develop new ways of countering the Russians. The sinking of the Moskva, the expulsion of the Russians from Snake Island, and the strikes on Russian facilities in occupied Crimea, an area previously thought too difficult to attack, show that the Ukrainians can plan and undertake missions requiring the operation of complex systems.

The challenge the Ukrainians now face is their most difficult one yet. They are attempting to liberate a large swath of land on the west bank of the Dnipro River, anchored by Kherson but stretching almost 100 miles in length and about 30 miles in width. The Ukrainians’ new offensive is a far grander and more complex operation than anything they have previously undertaken. They are trying to neutralize a large Russian force equipped with large stores of heavy weaponry, much of it just rushed to the Kherson region in preparation for the Ukrainian attack.

Since World War II, the advance of large armored forces has been based on control of the skies. The Ukrainians, though they are showing surprising ability in this area, are still battling the Russians for air supremacy. Moreover, Ukraine must move forward into territory now held by the enemy, rather than defend its own position. For almost all of the war, the Russians have been on the offensive. This has allowed the Ukrainians to use defensive firepower on them with great effectiveness. Recently, the number of photographically confirmed Russian-tank losses surpassed 1,000. The real figure is likely closer to 2,000; much of the destruction for the past few months has occurred in Russian-controlled territory, making photographic proof much more difficult to come by. Indeed, one could argue that the evolution of war, with the improvement of handheld anti-vehicle weapons and smaller drones, has given the defender important new advantages that make advancing extremely risky.

The Ukrainians seem to understand all of this. So far they have built a different kind of offensive in Kherson—one that could hold lessons for the future of war. What they have not done is prepare for the kind of operation that many were expecting the Russians to launch in February: a large-scale, fast-moving war in which armored units break through enemy lines and exploit the opening by moving quickly forward and cutting off or surrounding enemy forces. In the first week of this latest phase of the battle, launched on August 29, the Ukrainians have liberated just a handful of villages. But even though the front line has shifted only marginally, the Ukrainians are positioning themselves for a significant victory.

They have done this by patiently preparing the ground for success over the previous months. First, the United States and other NATO countries seemed persuaded, after seeing the tenacity and smarts that underlay the Ukrainian defense, to provide a great deal of intelligence information. The Ukrainians could thus gather a more complete picture of the logistics situation of the Russian army. Of course, they needed to translate this information into action, and for that they needed to improve the accuracy, range, and overall effectiveness of their artillery and rocket-launch systems. The Ukrainians went into the war mostly relying on old Russian or Soviet equipment, starved as they were of higher-quality NATO standard equipment by Western governments that discounted their country’s chances in a conventional war with Russia. Since then, however, the Ukrainians’ strength, resolution, and ingenuity have led the United States and other NATO countries to provide far superior weaponry. These include a High Mobility Artillery Rocket System (HIMARS), which, despite being relatively old for the American military, has shown itself in Ukrainian hands to be considerably better than any Russian equivalent. Since the Ukrainians first deployed HIMARS, at the end of June, they have methodically targeted Russian supply depots, greatly constraining the invaders’ ability to move forward.

Even more recently, Ukraine has started operating high-speed anti-radiation missiles, which take out enemy radar and seem to be playing havoc with Russian anti-aircraft defenses. This has allowed the Ukrainians to more fruitfully use drones, including the Turkish-made Bayraktars that seem to be exacting a heavy toll on Russian forces in Kherson.

As such, even with the announcements of the Ukrainians’ transition to a more intense phase of the Battle of Kherson on August 29, we have not seen major attempts to push tanks through the Russian lines. Instead, we have seen Ukrainians probing up and down the line, trying to assess the location and strength of Russian forces, attack weak spots, advance cautiously, and, most of all, continue the regular attrition of Russian forces. This kind of warfare—which involves building up offensive capability, tempting the enemy to rush defensive forces in, and then destroying those forces—moves slowly, and it does not resemble many analysts’ view of how modern war looks. But it plays to Ukrainian strengths while magnifying Russian losses.

Exactly how long the renewed Battle of Kherson will continue is tricky to say. Even if Ukraine is relatively successful, this phase of accelerated attrition might last for several weeks; even if Russian forces collapse in some places, they may prove harder to dislodge from others. However, as long as the Ukrainians can cut off Russian traffic across the Dnipro and use their superior systems to wear down Russian forces, they stand an excellent chance of driving them out of the west bank of the river. This would be the war’s most important victory since the Battle of Kyiv.

Post Views: 65
Previous Russia may not survive Putin’s disastrous decision to invade Ukraine
Next Turkey, Greece escalate war of words as they drag in EU, NATO