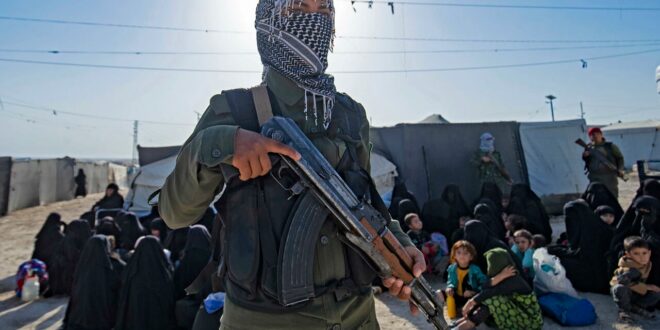 The Kurdish-led Syrian Democratic Forces said two of their fighters were killed and six jihadists arrested Thursday following clashes in a volatile Syria camp where a security operation is underway.

“Two of our fighters have succumbed to their wounds following clashes” with Islamic State group militants in the Al-Hol camp overnight, the SDF said.

“Two women and five men masquerading as women,” were involved in the attack on SDF fighters in the camp, the force said.

The ensuing fighting led to the killing of one jihadist and the arrest of six others, it added.

The Kurdish-run Al-Hol camp, which houses thousands of relatives of IS fighters, is the largest camp for displaced people who fled after IS was dislodged from its last scrap of territory in Syria in 2019.

It is still home to more than 56,000 people, mostly Syrians and Iraqis but also including other foreigners linked to the Sunni Muslim extremists.

The SDF, the de facto army of the autonomous Kurdish administration in northeastern Syria, launched a security operation in the camp last month to flush out hideout jihadists following an uptick in attacks.

Dozens of suspected IS operatives have been detained and major networks dismantled since the start of operations, the US-led anti-IS coalition said on Wednesday.

On Monday, “the SDF liberated four women in the camp who were found in tunnels, chained, and tortured by (IS) supporters,” the coalition statement said.

IS seized swathes of Syria and neighbouring Iraq in 2014, declaring a “caliphate” to administer the millions-strong population.

But a long and bloody fightback by Syrian and Iraqi forces with backing from the United States and other powers led to its eventual defeat in March 2019.

Post Views: 106
Previous Is Iraq on the brink of a new civil war?
Next Israeli general readies to lead the charge against Hezbollah