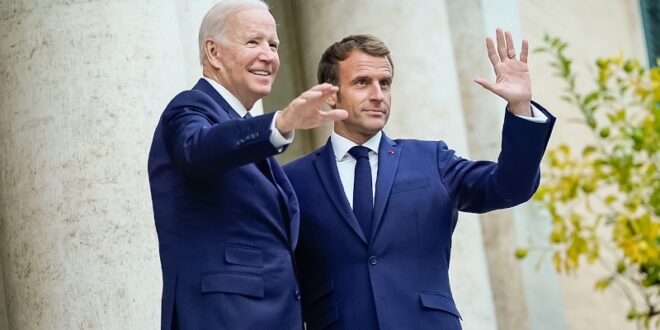 France Should Embrace The Transatlantic Relationship And Help Lead It – Analysis

French President Emmanuel Macron’s assertion three years ago that the transatlantic alliance was “braindead” rings as utterly misguided today.1The resurgence of war in Europe has reinforced NATO’s raison d’être and forced Europeans to face the fact that there is no realistic alternative to transatlantic cooperation. Further, more European policy leaders recognize China’s increasing threat,2 which bolsters the case for Western “friend shoring” on defense and other issues. This process will require leadership on both sides of the Atlantic. France, the largest military power in the European Union and the second-largest EU economy, is more reluctant to embrace Atlanticism than most of its NATO counterparts. This hesitance risks limiting the success and scope of efforts to reinforce transatlantic cooperation. Nonetheless, in the evolving geopolitical context, France’s best shot at preserving its interests and influence would be through embracing Atlanticism and helping lead the reinforcement of transatlantic cooperation in the realm of defense and beyond. American policymakers should encourage and extend a hand to their oldest ally to embrace such a shift.

Atlanticism is the support for a close relationship between Europe and the United States, and French reticence toward this goal is inextricably linked to the Franco-American relationship. For French elites, this relationship is shrouded with underlying in fears of “vassalization,” and they worry about French arms exports and their country’s sway in Europe. Dating back to the Suez Crisis in 1956, this attitude increased when General Charles de Gaulle established his grandeurfocused foreign policy, and he withdrew France from the NATO allied command structure in 1966. Still deeply engrained in the political-administrative apparatus,3 grandeur seeks to maintain France’s influence, independence, and interests.4 Ambition for grandeur thus led France to champion European strategic autonomy, and many elites have believed, especially since 1994, that France would have more influence in a separate European defense arrangement than within NATO. More recent pragmatic realism on NATO’s benefits caused France to reintegrate into the NATO allied command structure in 2009.5 But this change has not significantly altered the notion that France should avoid relying too much on the US.6

European strategic autonomy has been an official EU objective since the 2016 EU Global Strategy,7 and proponents paint it as complimentary to NATO. However, their claims remain mostly unconvincing because ambiguously and poorly defined strategic autonomy seeks to enable European independence from the United States.8 “What will Article Five [NATO’s collective defense clause] mean tomorrow?” questioned Macron in the same interview where he stated that NATO was braindead. While Europe needs to expand its military capacity, as the US has long wanted, Russia’s war of aggression in Ukraine has shown just how illusory true independence from American military capacity remains.9

As such, the clear institutional winner of the Russia-Ukraine War has been NATO and European Atlanticists.10 Central and Eastern Europeans have lost confidence,11 if they ever had any, that the EU could contribute to their security: NATO and US military guarantees are the only credible deterrent to Russian aggression. Sweden and Finland, two formerly nonaligned states that share a border with Russia, have hastily applied to join the alliance, a move that confirms how broad this sentiment is in Europe. As Zachary Selden highlights, “If Sweden and Finland were confident in the European Union’s ability to achieve meaningful strategic autonomy backed by military power, there would be no need to join NATO.”12 Furthermore, Sweden and Finland’s accession into NATO will bring more military capabilities and financial contributions than previous rounds of enlargement, which reinforces the case for creating a European bloc within the alliance. However, a serious European bloc in NATO would be almost inconceivable without French leadership, as the top military power and the only nuclear state in the EU.

A shift in French strategic thinking toward Atlanticism may be more realistic now. The combination of Europe’s inability to independently assist Ukraine and Putin’s war crimes represents the crumbling of two foundational notions in French strategic thought that opposed Atlanticism.13 The first is the hope that France could lead a Europe capable of independently defending itself. The second is the grandeur-based assumption that moral relativism applies to all superpowers (in this case, Russia and the United States) so that France can be a nonaligned mediating power between them.14 Russia’s invasion and subsequent war crimes discredit these assumptions, which gives Macron an opportunity to make significant shifts in French strategic thought. Now is a politically opportune moment to do so, thanks to his recent reelection to a five-year presidential term in a country where the executive branch has authority on foreign policy with little legislative oversight. Moreover, ongoing reform of the French diplomatic corps and high-level French service provides an opportunity for the government to appoint foreign policy advisors who would facilitate such a shift instead of opposing it.15

Beyond just a general political shift, different steps are needed to ensure that attitudes change among the French elite at a structural level, both in foreign policy and more broadly. Concretely, this would mean establishing broad and institutionalized forums of exchange and dialogue at different levels of government, including among elected officials, policymakers, and bureaucrats. The aim would be to reinforce understanding and relationships between Paris and Washington. Here, France could emulate and expand upon the success of the German example in establishing countless personal links between the German and American foreign policy communities.16 The political shift would also require the Macron government to make effectively countering the impact of Russian influence and disinformation a policy priority.17These Kremlin actions promote narratives and analyses hostile to NATO and the United States to both the French elite and general population.18

Besides strengthening a European bloc in NATO, a French embrace of the transatlantic alliance would ensure French grandeur more effectively than championing European strategic autonomy would. Strengthening NATO would still require moves toward European strategic responsibility that would seek to strengthen instead of weaken NATO.19 European countries need to reinforce their military capabilities to enable better burden sharing and establish independent European crisis management capabilities within their neighborhood. As the largest, most willing, and most effective military force in Europe, France would have a large role to play (certainly larger than Germany) in encouraging and coordinating such efforts. This effort would effectively fulfill French ambition to lead Europe and could bolster French legitimacy in leading and coalescing an increasingly capable European bloc within NATO. Such a role would structurally reinforce both French influence and stature vis-àvis its American counterparts in the alliance, thus assuaging concerns of vassalization.

The 2022 Madrid summit revised NATO’s strategic concept to consider the Chinese “challenge,” which reinforces the case for France to embrace Atlanticism. If Europe can help counter China, the alliance would continue to have bipartisan support in the US, where a growing faction argues that Europeans are “free riders.” If a reinforced European bloc in NATO allowed the US military to focus on East Asia and counter China, that argument would be less credible. Furthermore, if France can help lead the transatlantic relationship in NATO, it could also amplify cooperation in other policy areas to counter China. Non-defense initiatives to strengthen coordination to sideline Chinese influence are already forming in such initiatives as the US-EU Trade and Technology Council, but the US and Europe will need to expand these efforts in both ambition and scope so that they are truly effective.20

It is true that a French embrace of Atlanticism would constitute a significant departure from French strategic and political orthodoxy. But this goal is attainable with some help. While many wonder if President Joe Biden has a foreign policy vision,21 a change in France’s direction would require the United States to explicitly foster an even closer Western alliance as the geopolitical context becomes more challenging. Treasury Secretary Janet Yellen has alluded to the evolution toward such a framework on a global economic level,22 but this is not enough. Once America establishes such an agenda, the US could engage with France on this issue. If successful, French leadership in the transatlantic relationship would put the West in a stronger position to face the widening security challenges from Russia, China, and others.