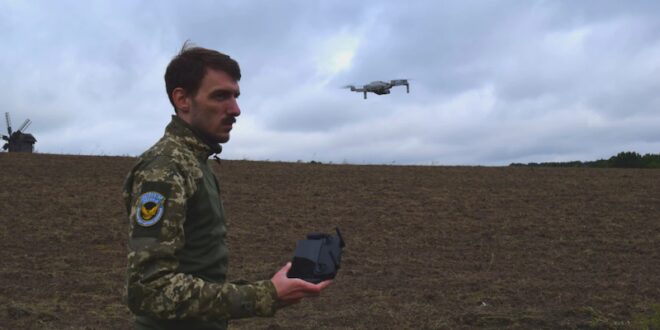 Ruslan, a 41-year-old former sales manager who asked that his surname be withheld for security reasons, started learning the ropes of drone warfare in the immediate wake of Russia’s full-scale invasion of Ukraine in February.

Ruslan’s unit of part-time reservists was near Kyiv’s Hostomel airport on the first day of the war when elite Russian paratroopers stormed it. As Ukrainian forces scrambled to beat back the Russian bridgehead, Ruslan’s unit learned that the 72nd Artillery needed help with targeting.

Although Ruslan’s unit had no trained drone operators, he and his comrades stepped up.

“One of the guys on the team had a drone,” he recalled. “We had eight guys: one flew, and the others guarded him.”

Seven months later, Ruslan is on rotation back from the front to hone his skills at the Kruk drone school in Kyiv, part of a broad push by Ukraine’s military and civilian organizations to train thousands of drone operators to fly vital military-reconnaissance missions.

Sitting at a picnic bench on a blustery morning with other soldiers following a lecture, Ruslan expressed his determination to learn more: “We never had time to get to dig into the copter controls” at the front, he said.

‘The Most Important Problem’

While Ukrainian social media regularly feature crowdfunding campaigns to buy drones for army units, “the most important problem for us is a lack of pilots,” said Maks, a 45-year-old instructor at the Dronarium, another drone-operator school teaching military personnel in Kyiv. Maks preferred not to give his last name for security reasons.

“There is a big problem with drone operators in Ukraine,” Anton Frolov, the lead instructor at the Kruk drone-operator school, agreed. “We haven’t got enough experienced pilots.”

The need for such operators is great because of the outsized role these machines can play in uncovering enemy positions and weak points.

Even less advanced, commercially available drones are a “key asset,” according to social-media commentary by Samuel Bendett, a research analyst with the U.S.-based Center for Naval Analyses.

Russia’s full-scale war with Ukraine, now into its eighth month, has prominently featured drones used in a variety of roles. Both sides have deployed advanced military drones, capable of flying as far as 300 kilometers to obtain intelligence or deliver lethal strikes.

Civilian drones, however, are even more commonly used, especially by the Ukrainian side.

Costing a small fraction of the price of top-flight military drones, commercial models that were built for aerial photography are now being put to use spotting enemy tanks and supply depots.

In early July, Ukraine’s military, in partnership with the Digital Transformation Ministry, launched the Army Of Drones initiative.

The initiative raises money for the purchase of military drones, runs a program for civilian donations of drones, and works with civilian drone schools to run drone-operator classes for the military.

A Drone Pilot For Every Platoon

But even more valuable than the drones themselves are qualified drone operators who are trained to get the most out of the technology.

When the war started, many civilian enthusiasts rushed to become drone pilots. But this untrained cadre resulted in substantial losses, according to Dronarium instructor Maks.

“They took really high losses,” he said. “They viewed flying through the lens of civilian conditions.”

In some cases, Russia identified and then targeted operators’ positions by exploiting a drone safety feature designed to help law enforcement, according to statements by Digital Transformation Minister Mykhailo Fedorov.

“We plan to train about 2,000 operators in the next two to three months,” Fedorov told Forbes Ukraine in August.

The Kruk and Dronarium drone schools receive donations to run their operations, as well as some financial help from the Digital Transformation Ministry.

Oleksandr, the chief trainer at Dronarium, who asked that his surname be withheld, said the school is currently training around 400 operators per month across three sites in Ukraine.

He’d like to see every platoon have a drone operator. Given the Ukrainian armed forces’ wartime size of 700,000 troops, achieving this target would require thousands of trained operators.

At the Kruk location in Kyiv, 25-year-old instructor Ilya Trokhin was playing drill sergeant to a group of students on a cold September morning.

“Get your head away from it,” Trokhin yelled at a student who was practicing launching a drone from the palm of his hand.

Minutes earlier, another student had cut his finger on a whirring drone blade.

Trokhin, who learned drone operation before the war by filming his friends’ snowboarding exploits, said the strongest indicator for how well a student will do in the institute’s five-day course is their level of interest.

“It’s really important that a cadet himself wants to learn,” he told RFE/RL as pairs of students practiced launching and landing their drones.

Instructors at both Kruk and Dronarium said it is particularly important that students learn how to avoid detection while operating their drones. At Dronarium, students learn to use camouflage tarps effectively to conceal their positions.

Operators also learn how to react if Russian electronic-warfare units take control of their drones. Dronarium’s Oleksandr said it is situationally dependent: a drone operator can keep flying as long as they have control of the drone’s movements, even if they lose some other functionality.

Kruk’s curriculum also includes bombing operations for those students who are interested. They handle practice bomblets specially constructed to match the weight of those loaded with explosives that are used in combat.

The stories of the instructors themselves reflect the ad-hoc nature of Ukraine’s rush to train as many drone operators as possible.

One 28-year-old instructor at Dronarium was previously serving as a drone-operator’s assistant near Kharkiv, although he had no practical experience piloting drones. When the drone operator left the battalion, he was promoted to operator, learning his craft on the job.

Dronarium trains only on commercial models. Oleksandr cites the DJI Matrice 30T as particularly useful, a $10,000 model more typically sold for agricultural or industrial uses than for ferreting out Russian soldiers.

The drones are not used directly out of the box. Without giving specifics, Oleksandr says modifications are made to protect the drones from Russian interference.

A Ukrainian soldier with the call sign Akela confirmed that Russian anti-drone interference on the front is extremely active. According to Frolov, the usual lifespan of a civilian drone in combat is only about five minutes amid active Russian electronic warfare measures.

Ukraine’s push to train more drone operators is a race with Russia, which is also turning to commercial drones to supplement its more expensive models.

Earlier this month, Russian civilians – along with “front-line” operators from the Russian-occupied areas of eastern Ukraine — held a multi-day drone competition and lecture series in the western Russian city of Novgorod to share knowledge among military drone operators.

A social-media channel associated with the Russian event posted that one of the key conclusions of the event was that there was an “enormous deficit of qualified drone operators and an even greater deficit of good instructors.”

Course participants, according to the organization, say that Russia’s military command has closed its ears to the need for drones.

Ukraine, meanwhile, is speeding ahead with training operators and purchasing additional drones.

“They didn’t leave us with any choice,” Fedorov told RFE/RL. Gesturing to a nearby chair, he added: “If this chair could fly, it’d also be flying out there.”