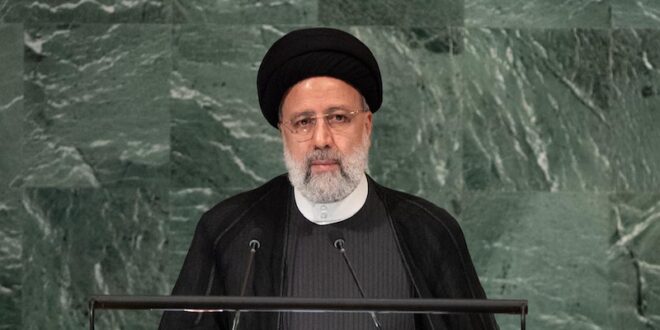 Notorious mass murderer Ebrahim Raisi was running scared at the UN last week. As leader of the world’s foremost pariah regime, this truly evil man had plenty of time on his hands in New York, with few heads of state willing to engage with him.

News outlets such as The Washington Post and Reuters were barred from the Iranian president’s press conference after they refused to refrain from asking about the mass protests that have swept Iran in the past week. CNN’s British-Iranian chief international anchor Christiane Amanpour commendably refused to enable regime propaganda by wearing hijab to interview Raisi, who duly failed to turn up.

To the few who attended his press conference, Raisi explained that “bad things” happened to people at the hands of authorities everywhere. He should know, having the blood of thousands of murdered Iranians on his hands after decades as the Islamic Republic’s chief hatchet man.

Raisi has pledged “decisive action” to crush the protests, and he has also promised to investigate their proximate cause — the death of a 22-year-old woman, Mahsa Amini, at the hands of Iran’s “morality police.” Does he plan to investigate his own complicity? It was Raisi himself who in July personally ordered the latest violent crackdown on women after eight years of relatively looser enforcement of Iran’s preposterous dress code.

Raisi is the personification of why a beautiful and intelligent young woman, just a couple of hours after leaving her home, was admitted to hospital with fatal brain damage. Mahsa was neither a criminal nor a threat, but she represented the right that every Iranian demands — to go freely about their lives, without being subject to extreme violence.

The thuggish nature of Raisi and Ayatollah Khamenei’s regime is highlighted by the way Mahsa’s family came under intolerable pressure to back the authorities’ distorted version of events. Similar gangster-like pressures are being systematically exerted upon families of the dozens of citizens killed in last week’s protests.

This criminal theocracy, directly and through its proxies, has also visited terrible afflictions on Arab nations, and has the blood of thousands of Syrians, Iraqis and Yemenis on its hands. But we mustn’t forget that the biggest victims of this dictatorship are its own citizens. During the bloody 2019 uprisings well over 1,900 Iranians were murdered. The 2009 protests were comparably brutal.

Khamenei insisted last week that “resistance, not submission” was the means by which Iran would be victorious on the world stage. His citizens appear to be taking him literally, demonstrating their refusal to submit to their oppressors and showing Khamenei what genuine “resistance” looks like.

Thousands of fearless women, from the very young to the elderly, have taken part in protests. They burned their hijabs, publicly cut their hair, and danced on the roofs of police cars chanting “Death to the dictator” —and suffered beatings and arrests for these acts of courage. There were even protests in the women’s wing of the notorious Evin prison in Tehran.

Demonstrations have been reported in all of Iran’s 31 provinces and over 80 cities, from the capital Tehran to Qom, the ideological birthplace of Khomeinism — all despite internet blockages, disruption to mobile networks, the closure of universities, the deployment of tear gas and live ammunition against peaceful protesters, and thousands of arrests and killings. Some of the fiercest demonstrations have been in the Kurdish north, Mahsa’s home province, where entire towns have fallen into the hands of protesters.

In recent years, Iranian families have fallen into ever-worsening poverty, as billions of dollars of their national wealth was exported overseas to bankroll wars, terrorism and militancy. The ayatollahs have destroyed the economy, consolidating Iran’s position as a sanctioned and marginalized pariah state while enriching themselves through vast, corrupt theological foundations that swallow up most of the state budget. The ayatollahs’ children live lives of debauched opulence overseas, while citizens starve. Damn right Iranians are angry!

The army has threatened to violently crush protests and act decisively against “the conspiracies of the enemies.” Regime supporters marched through major cities chanting “death to the seditionists,” insisting that the protests were a plot by America, Israel and “Kurdish separatists.”

The regime has moved to criminalise VPNs in order to drastically reduce internet access. Millions of Iranians are being sent text messages threatening them with the consequences of participating in “sedition.”

Many of the riot police deployed to confront the protesters are young and penniless, and have little love for the evil dictatorship they are propping up. Even some of the usual regime mouthpieces have criticized its heavy-handed tactics.

Are Western nations so restrained in their expressions of “concern” because they are still holding out for a quickie nuclear deal with these terrorists, in the hope that the mullahs will reopen the oil taps and stabilize global energy markets? It is exactly such deals with the devil that enable industrial-scale crimes against humanity. Instead, these “freedom-loving nations” should be standing shoulder to shoulder with the Iranian people in their struggle for freedom from tyranny.

Even if this malign theocracy musters sufficient self-preservation instinct to crush these latest protests in a lake of blood, it will only be months before desperate, enraged citizens rise up again. Never before has a regime invested such ceaseless efforts into making itself so hated, at home and abroad.

For Iraqis, Lebanese, Syrians and Yemenis living out the appalling consequences of “wilayat al-faqih” tyranny, the greatest consolation is that soon — perhaps even in the coming days — we will see this whole Satanic edifice, along with its puppets, cheerleaders and militias, disintegrate before our eyes.