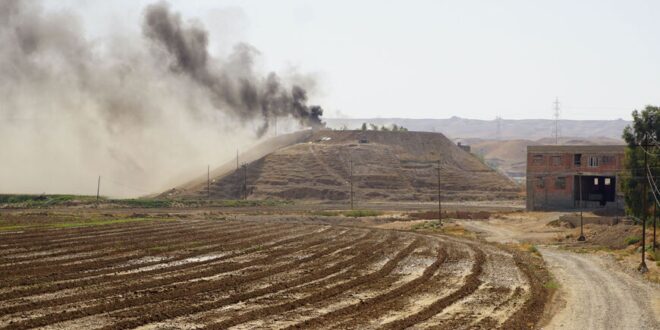 Iran ramps up its bombing campaign in northern Iraq in what Iraqi Kurds argue is an attempt to divert the world’s attention from the killing of Kurdish woman Mahsa Amini.

Iran unleashed a wave of missiles and drones on the headquarters of three separate Iranian Kurdish opposition groups based in Iraqi Kurdistan today, killing at least nine people and wounding 32 others, the Kurdistan Regional Government (KRG) of Iraq’s Ministry of Health said, adding that it expected the death toll to rise.

The attacks, among the fiercest since Iran resumed its targeting of the Kurdish opposition over the past few days, took place as demonstrations against the beating to death by morality police of Mahsa Amini, a 22-year-old Iranian Kurdish woman, continued across the country.

Iranian media is blaming the unrest on “outside forces,” namely Israel and Saudi Arabia, saying they are seeking to create an “independent Kurdistan” carved out of Iran, a common trope that is trotted out whenever the regime feels vulnerable.

An estimated 10 million Kurds, mainly Sunnis, who make up around a tenth of Iran’s population have long been denied political and cultural rights. At least 1,500 Kurdish activists were arrested in the last days’ tumult. The Kurdish majority areas in the country’s northwest, alongside Balochistan in the southwest, are among the least developed. The demonstrations over Amini’s murder first erupted in Tehran but rapidly spread to Iranian Kurdistan.

The strikes against the headquarters of the Kurdistan Democratic Party of Iran (KDPI) located in Koya, some 65 kilometers east of Erbil, were by far the most devastating.

KDPI sources said civilian settlements, including a school, near the party’s main office building had also been struck. Khalid Azizi, a spokesman for the KDPI, said two women were among the dead and several children had been badly wounded. One of the victims was pregnant. Her baby was extracted from her corpse and survived. Reyhana Kanani was 24. “We have great difficulty getting full details because the attacks are ongoing; there are around a thousand people living in our settlement. People are absolutely terrified,” Azizi told Al-Monitor. Azizi said the attacks began at 10:30 a.m. local time.

Abdullah Mohtadi, leader of the Komala Party of Iranian Kurdistan — another of the groups that were targeted — said attacks on his compound 16 kilometers southwest of Sulaimaniyah, the second largest city in the Kurdistan Region of Iraq, had also started at 10:30.

Mohtadi said numerous civilians had been wounded but “thank God so far we have no reports of any deaths.”

Iranian Kurdish opposition leaders agree that Iran has trained its guns on them in order to deflect attention from the root cause of the demonstrations by framing it as a foreign plot in which the Kurds are willing pawns.

“The fact is that we are not separatists and we have not been engaged in any kind of organized armed activity inside Iran since the early 1990s. There is no armed struggle, just peaceful demands,” Mohtadi asserted. “All we want is our democratic rights.”

More consequentially perhaps, the regime seems unnerved by the solidarity shown by non-Kurdish Iranians and opposition groups with the country’s Kurds because of Amini’s death. Persian demonstrators are chanting “Kurdistan is the eyes and the light of Iran,” Mohtadi noted. “The Kurds, instead of being perceived as the usual suspects, are now hailed as being at the vanguard of popular protests. It’s unprecedented,” he added.

Yet around four years ago, the KDPI and Komala held three rounds of secret talks with regime officials in the Norwegian capital, Oslo, with independent foundation NOREF mediating between the two sides. The talks collapsed when the Iranians refused to discuss the Kurds’ demands that they publicly acknowledge the talks were taking place, Khalidi recalled.

With hard-liner President Ebrahim Raisi at the helm and the protests showing little signs of abating, there are few prospects that those talks will resume. “I expect the attacks against us to continue,” Mohtadi said.

Iraq’s Foreign Ministry and the KRG condemned Iran over its actions, as did the United States, Germany, the UK and the United Nations. “Attacks on opposition group’s through the Islamic Republic of Iran’s missiles, under any pretext, is an incorrect stance that promotes a misleading interpretation of the course of events,” the KRG stated in an oblique reference to Iran’s efforts to scapegoat the Iranian Kurds for the mass protests inside its own borders.

“Iranian leaders continue to demonstrate flagrant disregard not only for the lives of their own people but also for their neighbors and the core principles of sovereignty and territorial integrity enshrined in the UN Charter. It cannot deflect blame from its internal problems and the legitimate grievances of its population with attacks across its borders,” said US national security adviser Jake Sullivan.

It’s unlikely that either Baghdad or the KRG can do anything to prevent the attacks any more than they have been able to prevent those carried out by Turkey on the Kurdistan Workers Party (PKK), the Turkish Kurdish armed group that is also headquartered in Iraqi Kurdistan. Thousands of civilians have been displaced and scores of others killed in Turkish airstrikes over the past three decades. Recent victims include nine Iraqi tourists who died in a Turkish artillery attack in July. Iraq carried the matter to the UN, but its angry statements petered out as Iraqi politicians descended into their chronic squabbles over forming a new government.

“We are the weakest link and therefore they (Iran) can get away with it; therefore, they do it,” said a senior Iraqi Kurdish official speaking not for attribution to Al-Monitor.

Lawk Ghafuri, a KRG spokesman, told Al-Monitor that media reports suggesting that Iran had also targeted the PKK’s Iranian branch known as The Party for Free Life in Kurdistan, or PJAK, had come under any Iranian fire were inaccurate.

The party is mostly shunned by other Iranian Kurdish groups because of its links to the PKK, which is designated as a terrorist group by the United States and the European Union but has broader global reach than any other Kurdish group in the world. At least 12 Kurdish prisoners were executed in Iran in June alone, according to the Paris-based Kurdish Human Rights Network — one of them over alleged connections to the PKK.

Iranian Kurdish groups, much like their Iraqi Kurdish counterparts, have been mired in internal fights. But two wings of the KDPI recently agreed to reunite and the main Kurdish groups formed the Center for the Cooperation of the Parties of Iranian Kurdistan in 2017. The grouping called for a one-day general strike on Sept. 19, three days after Mahsa’s death, which was widely observed across the country.

“It’s after that day that everything really started. The regime is under mounting pressure. They fear for many reasons that Kurdistan could be a point of departure for the liberation for the rest of Iran,” said Asso Hassan Zadeh, an Iranian Kurdish analyst and former deputy leader of the KDPI.

“We have more connections with the rest of the world than other parts of Iran, and the role played by the Kurds in the current protests helps explain the reaction,” Hassan Zadeh told Al-Monitor.