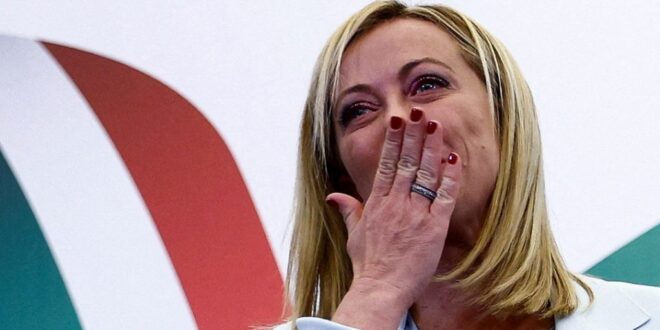 Which Giorgia Meloni will Washington get?

Long a controversial figure both at home and abroad over her party’s direct lineage from Italy’s neo-fascist movement, Giorgia Meloni is now expected to become the country’s newest prime minister after her party secured the most votes in Sunday’s election. Her controversial views on migration, erstwhile fascination with Russian President Vladimir Putin’s Russia, anti-LGBTQ stance, and open criticism toward the European Union (EU) have all contributed to her image as an unsavory right-wing politician.

Yet Meloni has come a long way since when she defined the EU as “rotten to its core” in 2016 and opposed sanctions against Russia following its 2014 annexation of Crimea. She defines herself and her Brothers of Italy party as conservative—supporting lower taxes and a more business-centric approach—has built strong connections in Washington, and has become a staunch supporter of sending military support to Ukraine.

Today, Meloni’s position on the United States is clear and well-defined. She has recently struck an agreement with the US International Republican Institute to organize a major conference on Afghanistan in Rome. She is also a member of the Aspen Institute and participated in this year’s Conservative Political Action Conference. She has said that Italy and the United States have “shared roots” and goes on the record with leading American newspapers to defend her positions.

She also seems to have reversed her once Kremlin-friendly positions, recently criticizing Russia on multiple occasions for its “unacceptable” invasion of Ukraine. She was one of the biggest supporters of current Prime Minister Mario Draghi’s stance on sending weapons to Kyiv, pitting herself against populist politician Matteo Salvini from the right-wing League party (who once entered the European Parliament wearing a Putin T-shirt).

Yet still, Meloni’s rhetoric at home offers a more complicated picture and begs the question: Can the United States really trust her?

Although she portrayed herself and her party to Washington’s ruling elites as a conservative, they have time and again refused to renounce the party’s ties to Italian fascism. When Italy’s parliament voted to dismantle the neo-fascist party Forza Nuova in October 2021—after it orchestrated a violent attack against one of Italy’s leading unions—the Brothers of Italy abstained from voting. More recently, a video of a young Meloni resurfaced in which she claimed that dictator Benito Mussolini was a “good politician” and that “there have not been other politicians like him.” The Brothers of Italy’s logo even strongly resembles that of Italy’s neo-fascist, post-World War II party, the Italian Social Movement.

But most importantly to American interests abroad, Meloni has long been a Euroskeptic; her seemingly pro-European stance, demonstrating unwavering support for Ukraine and hosting pro-EU conferences in Rome, is a recent phenomenon. Up until 2019, Brothers of Italy was a major proponent of dissolving the Eurozone and a strong supporter of Brexit. Party leaders also criticized the European Central Bank, often referring to the institution as a place of “usurers and lobbyists.” But during the 2019 European elections, Meloni ran with the European Conservatives and Reformists Group, becoming its president in 2020, and has since then made an effort to forge strong ties with European Parliament President Roberta Metsola.

If there’s one thing the United States has learned in recent years, it’s that far-right parties often go rogue—and do so very quickly. Consider the cases of Poland and Hungary.

Following a long run of centrist governments, Poland’s Law and Justice (PiS) party rose to power in 2015 and began opposing the EU, migration, and LGBTQ rights. However, much like Meloni’s party, PiS is part of the European Conservatives and Reformists group and was founded largely on conservative principles inspired by the Ronald Reagan-era US Republican Party. Today, Poland under PiS is seeing an erosion of the freedom of expression, judicial independence, and women’s rights.

In Hungary, meanwhile, Prime Minister Victor Orbán has corroded the country’s democratic stability since coming to power in 2010 by allowing himself more powers through constitutional reforms. He has also attacked the media and instituted anti-immigration policies. Similar to PiS, Orbán’s Fidesz party ran with the conservatives through the European People’s Party, the European Parliament’s center-right group—using it as something of a Trojan horse to break into European establishment politics.

Together, Poland and Hungary have taken steps in recent years to prevent the EU from implementing a post-pandemic recovery plan and the resettlement of migrants, thereby undoing the bloc’s cohesion. Budapest also sets itself apart from Brussels given its largely pro-Russian stance, refusing to send military aid to Ukraine and formalizing gas deals with the Kremlin. Moreover, its democratic backsliding has serious implications on the United States and the transatlantic partnership because it weakens their ability to strengthen economic ties, tackle common security threats such as Russia, and fight climate change.

The deep cultural, trade, and security ties between Washington and Rome mean the White House will need to watch its Italian partner’s positioning closely.

Strategically, Italy is a vital partner in securing NATO’s southern flank around the Mediterranean Sea, where the spillover effects of North Africa’s conflicts seriously risk destabilizing the Alliance. Italy also plays a crucial role in Libya by supporting peace negotiations in the country, where Russia has deployed mercenaries from the the Wagner Group to exert greater power over the region. Italy is also home to the US Navy’s Sixth Fleet in Naples, where more than 33,000 US service members are stationed.

Italy alone can do little to fend off American enemies abroad, secure US interests, and strengthen the transatlantic alliance. But it can have a great impact as a pillar of multilateral cooperation within the EU and NATO by creating a stronger bloc against Russia, securing a peaceful and prosperous Mediterranean, and find durable solutions to issues such as migration and climate change.

But Meloni has given plenty of indications that she may not be that reliable partner. She showed her true colors after a European Parliament resolution called Hungary “a hybrid regime of electoral autocracy.” She criticized the vote, saying that “Orbán has won the elections” and therefore Hungary is a “democratic system.”

Meloni’s EU stance, though it has moderated a bit in recent years, also reflects an Orbán-style view. For instance, she opposes the primacy of EU over national laws, and during this year’s campaign, she stated that the defense of national interests over European ones remains paramount. She also vehemently opposes a new majority voting system in which individual EU members states would no longer have veto power. She recently declared that if Brothers of Italy were to win, “the joke will be over” and that Italy will start “defending its interests” just like “other countries.”

Meloni’s open support for Orbán also begs the question of whether she will drift back toward Hungary’s position of opposing further sanctions on Russia. Just recently, she was photographed with a pro-Putin regional minister who in 2016 established a fake consulate for the Ukrainian breakaway Donetsk People’s Republic in Turin. Her likely coalition partners, Salvini’s League and former Prime Minister Silvio Berlusconi’s Forza Italia, have a history of fondness for Putin.

The Brothers of Italy’s track record is a giant warning sign that the party is likely to disrupt European unity—much to the detriment to the common fight against Russia and to Washington’s interests. This is why the Biden administration should adopt a more cautious approach toward Meloni than it has so far.

For one, it should make clear to Meloni that democratic backsliding in Italy will not bode well for the transatlantic partnership. If Italy pursues anti-democratic policies at home and supports semi-autocratic leaders abroad, joining forces with the United States against Russia—as helpful as it may be—will do little in achieving an overall freer and more prosperous world. Washington should also firmly condemn all and any links between Brothers of Italy, neo-fascism, and pro-Putin ideologies and refuse to meet with members of her party who have a demonstrated history of supporting any such principles.

Maintaining such a firm stance would send a clear message: The United States won’t tolerate another rogue European actor.

Post Views: 94
Previous Russia’s military isn’t ready for an escalation. Ukraine and its partners can exploit that.
Next ECB chief Christine Lagarde: ‘Our primary objective is price stability’