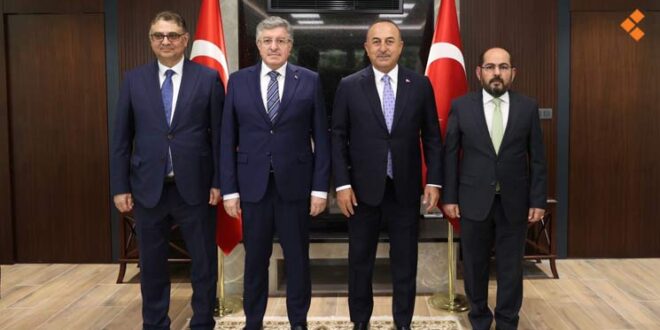 Russia is pushing Turkey in the direction of normalization with the Syrian government, according to Athr Press.

Several members of the Syrian Opposition Coalition (SOC) have leaked documents in which Turkey warns SOC not to waste time in any talks between the opposition and the Syrian government. The documents note that Turkish-Syrian talks were one of Russia’s conditions for Turkey to play the role of mediator between Russia and Ukraine. These developments coincide with talk of obstacles and stumbling blocks in Turkish-Syrian political talks, as well as several reports spreading that Ankara plans to close SOC’s offices and withdraw financial support from it.

“If you don’t want to stop playing, we can talk to others; there is a rational opposition ready to play this role,” said the leaked document, a photo of which was posted on several personal Facebook pages of opposition members. The document included key points discussed at a meeting between the opposition coalition and the Turkish side in Ankara, held on September 9th.

According to the leaked document, the meeting was attended by SOC head Salem al-Meslet, head of the so-called “negotiating body” Badr Jamous, head of the so-called “interim government” Abdul Rahman Mustafa, the co-chair of the opposition committee for constitutional amendment Hadi al-Bahra, and a Turkish official only identified as Ardem.

The leaks, which were posted on Facebook and quoted by the Syrian newspaper Al-Watan, reported that meetings had taken place with the Syrian side, for “difficult but useful” discussions. According to the leaked document, Russia is pushing Turkey in this direction, stipulating that in exchange for Turkey’s mediation between Russia and Ukraine, there should be normalization with the Syrian government.

Ardem, the Turkish representative, stressed during his meeting with SOC members: “President Bashar al-Assad is the legitimate representative of the Syrian people at the United Nations — UN Resolution 2254 stipulates this reality. This is the truth, and you have to agree to that.”

“The delay in accepting this reality exposes you daily to greater losses,” he added. “The United States wants a Kurdish state in the north: does that comfort you?”

“Today you may have a chance to participate in the government even if by a reasonable percentage tomorrow you will lose this opportunity,” Erdem continued. “As Turks, our circumstances are not easy. We have elections and the opposition uses the Syrian file against us.”

“The Turkish people want to see action. And I want to speak more frankly: these are our ideas currently. If you do not want to stop playing and wasting time, let’s not talk anymore, because we can talk to others. There is a rational opposition ready to play this role. I want your honest opinion on this matter.”

Post Views: 82
Previous Thirteen reported killed as Iran Revolutionary Guards target dissident sites in Iraq
Next Opening of Crossings Between Regime Areas and North: Who Benefits the Most?