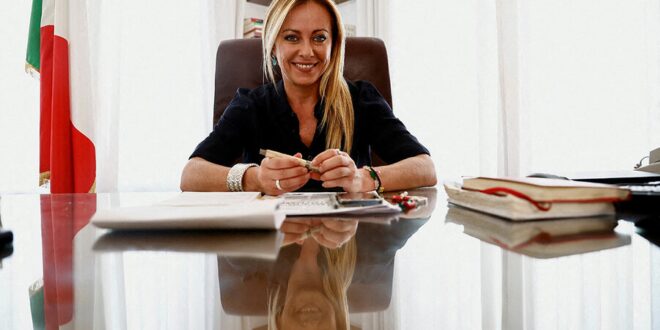 Why is Italy swerving far right? Many feel they have no choice.

She has waged a slick communication campaign, using speeches peppered with anecdotes to suit each region. Her messages have something for everyone: fiscal relief, youth employment, secure borders, products made by Italians in Italy, regaining some sovereignty from the European Union, and turning Italy into a renewable energy hub.

But Ms. Meloni’s rise to the top of the polls has alarmed many, due to her xenophobic rhetoric, her and her party’s connections to Italy’s fascist past, and the track record of the Brothers of Italy while governing in Italy’s Marche region.

Though her campaign has genuine appeal for some Italians, for others she is simply the option untried. After years of center-left, center-right, and populist governments, Ms. Meloni and the Brothers of Italy are “fresh faces” – and that may well be their biggest asset.

“Meloni will get many votes because others have lost their credibility,” says Giancarlo M., a retired fish market worker in Ancona. “She has worked for those in despair, and won over the disillusioned.”

As young female protesters wrapped in rainbow flags demonstrate at a Brothers of Italy campaign rally in Milan, party leader Giorgia Meloni pokes fun at them from the stage.

“They finished their holidays, got off dad’s yacht, and came here,” she says, as security tries to keep party supporters’ tempers from flaring, particularly after the women call them fascists.

Jokes are par for the course as Ms. Meloni crisscrosses Italy to whip up support for her party ahead of elections on Sunday, Sept. 25. The far-right politician looks likely to become Italy’s first female prime minister, as the country is gripped by political and economic upheaval. She has waged a slick communication campaign, using speeches peppered with anecdotes to suit each region. Her messages have something for everyone: fiscal relief, youth employment, secure borders, products and children made by Italians in Italy, regaining some sovereignty from the European Union, and turning Italy into a renewable energy hub.

But Ms. Meloni’s rise to the top of the polls has alarmed many, due to her xenophobic rhetoric, her and her party’s connections to Italy’s fascist past, and the track record of the Brothers of Italy while governing in Italy’s Marche region. Though her campaign has genuine appeal for some Italians, for others she is simply the option untried. After years of center-left, center-right, and populist governments, Ms. Meloni and the Brothers of Italy are “fresh faces” – and that may well be their biggest asset.

“Meloni will get many votes because others have lost their credibility,” says Giancarlo M., a retired fish market worker who likes her emphasis on Italy’s potential as a renewable energy hub. “She has worked for those in despair, and won over the disillusioned.” Like many Italians, he declined to give his full name to the media.

“Christianity, being Italian, and being a mother”

Sunday’s snap elections were triggered by the resignation of Prime Minister Mario Draghi and the collapse of his broad government coalition, which the Brothers of Italy were not part of. But the party rose in popularity partly at the expense of two parties that were in the coalition: the center-right Forza Italia, the party of outlandish octogenarian and former prime minister Silvio Berlusconi, and the hard-right League party of Matteo Salvini, an ex-interior minister. Both Forza Italia and the League are expected to join the Brothers of Italy in the next government as junior partners.

Ms. Meloni and her party have a history further to the right of either of their conservative rivals. In her youth, she was a member of the Italian Social Movement (MSI), which was founded by the heirs of Benito Mussolini. The Brothers of Italy also use iconography tied to the MSI. But Ms. Meloni rejects the “fascist” label, saying fascism has been confined to history.

Her supporters echo those sentiments. “Brothers of Italy is on the right, but it is not the extreme right,” says Paola Marrone, a Milan-based lawyer who takes pride in always voting for the party, even when it barely secured 2% of the vote.

Ms. Marrone considers herself completely in sync with Ms. Meloni’s social and economic views, although on the international front she is less on board with Ms. Meloni’s support for Ukraine. Euroskeptical parties like Brothers of Italy tend to have better ties with Moscow. “[Ms. Meloni] has an eye out for Italians,” says Ms. Marrone. “We are invaded by immigrants. The plus that Meloni has is that she is coherent, concrete, and credible in her proposals.”

Indeed, when addressing the crowd in Milan, Ms. Meloni gets the loudest applause for her take on family demographics and migration. Italy has the third oldest population in the world, and deaths far outweigh births. It is also a steppingstone for Europe-bound migrants.

“This is not a demographic winter,” she declares. “Gentlemen, it’s an ice age. It is clear this nation is going to disappear, and I don’t want this nation to disappear. I don’t think the demographic problem can be solved by bringing in immigrants, as the left says. … I want a nation that says, ‘When you make a son, you are doing me a courtesy. Not only will I pay you for it, I will thank you for it.’”

Although she has moderated her language, especially in speeches geared for the European audience, Ms. Meloni’s mantra – “I am Giorgia, I am a woman, I am a mother, I am Italian, I am Christian” – neatly sums up her message. “These are the main values that Giorgia Meloni is calling for and speaking to: Christianity, being Italian, and being a mother,” says Marianna Griffini, lecturer in the Department of European and International Studies at King’s College London.

“They are against freedom of choice”

Sitting in the shadow of the Church of St. Domenico at the Piazza del Plebiscito in Ancona, representatives of a local feminist network say the Brothers of Italy could mean a retreat for women’s rights in Italy. They have seen it happen, they say, because the region of Marche where they live is one of two where Brothers of Italy won regional elections in 2020, after decades of being governed by the center-left.

Abortion has been legal in Italy since 1978, but women in Marche are struggling to access the procedure and often need to travel to other regions to get it. That’s because Marche has one of the country’s highest percentages of so-called conscientious objectors, or doctors who refuse to perform abortions. And Marche also refuses to implement updated health ministry guidelines that extended women’s right to access the abortion pill to nine weeks of pregnancy, rather than seven. That’s a problem, the women say, due to huge waiting lists and a provision for a seven-day waiting period before a woman can get an abortion.

“Brothers of Italy mask themselves as pro-life but really they are against freedom of choice,” says Manuela Bartolucci, a former obstetrician. “They worry that if Italian women abort, the ethnic composition of Italy will change. They present abortion as a cause for low-birth rate and link it to demographic fears … that immigrants are giving birth to many children and these people will replace Italians.”

She also points out that the party voted against civil unions in Italy and opposed giving anti-discrimination protections to the LGBTQ community. “[Brothers of Italy] want women to come back to the role of wives and homemakers,” adds her friend Dolores Rossetti, who volunteers at a center for domestic violence survivors. “Being rewarded for having more children is a fascist idea.”

Giussepe Rizzi, president of the Catholic faith and education association Azione Cattolica Arcidiocesi Ancona-Osimo, notes abortion is a polarizing issue, especially among staunchly Catholic Italians. “Abortion, like euthanasia, is a topic relating to life that is very delicate,” Mr. Rizzi said in a phone interview. “The Christian community is very divided. … Performing an abortion is not the same as operating appendicitis. It can be correct for a doctor to refuse to perform an abortion.”

The LGBTQ community is also concerned about a Ms. Meloni victory. Activist Giacomo Galeotti notes Marche held a Pride parade in 2019 with the support of regional authorities. That backing ended with Brothers of Italy. “It’s really clear the vision Giorgia Meloni has on LGBT+ rights,” says Mr. Galeotti. “She is against it.”

The regional government of Marche declined a request for in-person interviews or to answer questions via email.

“There are no alternatives left”

The fish market of Ancona springs to life well before the rest of the city. Large and small vessels slip out into the Adriatic after midnight and return in waves before 5 a.m. Hundreds of boxes filled with the catch of the day are presented for the assessment of potential buyers. Numbers on a digital blackboard announce the price of clams, shrimp, sole – values rising and falling in the search of a deal.

Ms. Meloni’s promises of fiscal relief and financial help for families have hooked several fishers and retirees lingering for coffee at the port. They say the prohibitive price of fuel has forced them to cut down the number of days they spend at sea from four to two. Her emphasis on Italian sovereignty also resonates. EU funding may mean the port is getting new cash registers and a restaurant, but Brussels’ crackdown on plastic and overfishing has made a bigger, negative impression.

“For me it was a mistake to enter the EU,” says Roberto, upset over restrictions on the amount of clams boats can catch: 400 kilograms (880 pounds) per vessel. “The EU makes rules for everyone, but you can’t apply the same fishing norms in Germany and Holland to the Adriatic Sea. It is not the same thing. Everyone has different product. You can’t put a cap on fishing. If the market demands more, then we need to go get the fish from somewhere else.”

Others like Ms. Meloni’s tough talk on migrants. Andrea Amici, another fisher, calls migrants “disgusting stuff” who would best be avoided.

“Meloni will have a lot of support because there are no alternatives left,” Mr. Amici says. He sees legislative efforts to criminalize discrimination against the LGBTQ community and legalize cannabis as prime examples of what he considers senseless laws supported by the left. “There are bigger issues than this with Italy coming out of the pandemic and the war. The center left has governed for 40 years and delivered nothing. It only makes taxes, and things are already difficult for us.”

Paci, the aging captain of the fishing vessel Il Lupo, can’t shake off concerns over the roots of Ms. Meloni’s party. “For me, they are the heirs of fascists,” he says. “Fascists have not run the country since World War II. If they are in power now, who knows what they will do, but the thought is scary.”