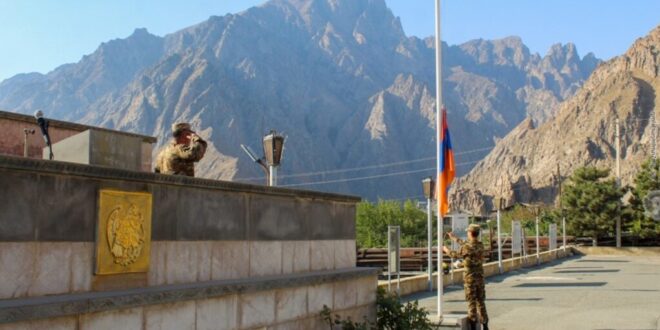 In the southernmost part of the Caucasus, Iran shares a 750-kilometer (km) border with Azerbaijan and the Nakhchivan region, of which about 138 km (Zangilan, Jabrayil and Fuzuli) had been controlled by Armenian forces after the end of the First Nagorno-Karabakh War (1991–1994). After the Second Karabakh War in 2020, these areas returned to the sovereignty of Azerbaijan. For its part, Iran’s border with Armenia is only 40 km and yet is considered a lifeline for the three million Armenians whose landlocked country has been regionally isolated by Azerbaijan and Turkey (see EDM, December 18, 2020).

Before the Second Karabakh War, Tehran was not particularly concerned about its border with Armenia. After the war, Iran’s main concern became Azerbaijan’s hopes to realize the Zangezur Corridor by force, in such a way that the 40-km border between Iran and Armenia could be compromised or blocked (OC Media, April 21, 2021). In truth, Iran has no objection to the implementation of the ninth clause of the 2020 Karabakh ceasefire agreement, which includes granting Azerbaijan communication access to Nakhchivan. During the past three decades, communication between Baku and this region only took place via Iran. While Tehran does not object to this arrangement, it strongly opposes the change of international borders in the Caucasus, the blocking of the Iranian-Armenian border and the possibility of renewed conflict between Armenia and Azerbaijan.

For this reason, the massive maneuvers of Iran’s army and the Islamic Revolutionary Guard Corps (IRGC) on its northwestern border in September and October 2021, unprecedented in the three decades since the collapse of the Soviet Union, signals the level and depth of Iran’s concerns about recent developments in the South Caucasus (Valdaiclub.com, January 18). Indeed, the outbreaks of violence between Armenia and Azerbaijan, the repeated threats of Baku to open the Zangezur Corridor by force, Turkey’s ongoing support of Azerbaijan and Russia’s silence and ambiguous position regarding the region have further exacerbated Tehran’s concerns. On the sidelines of the 7th Summit of the Astana Peace Process in Tehran, Supreme Leader Ayatollah Ali Khamenei met with Turkish President Recep Tayyip Erdoğan and clearly delineated that “if there is a policy to block the Iranian-Armenian border, the Islamic Republic will oppose it because this border has been a communication route for thousands of years” (Fars News Agency, July 19).

Recent fighting between Armenia and Azerbaijan in September 2022 resulted in nearly 300 deaths and dozens of injuries on both sides, further aggravating Iran’s concerns. Some news sources even announced that Tehran had deployed 50,000 troops to the Armenian border (EuroWeekly, September 16). Indeed, Mohammad Pakpour, commander of the IRGC’s ground forces, on September 16, visited the units located on the border with Armenia, Azerbaijan and Nakhichevan, stating that their readiness level is high (EuroWeekly, September 16). Additionally, the chief of staff of the Iranian Armed Forces, Mohammad Bagheri, during a military parade on the anniversary of the Iran-Iraq War (1980–1988), declared, “Iran will not tolerate any change in the borders in the region and call on Azerbaijan and Armenia to solve the issues between them peacefully, through dialogue. We do not seek conflicts and wars, but we do not remain silent when it is necessary to resist them” (Iran Press News Agency, September 22).

Several reasons underline Iran’s concerns regarding the possible blocking or destruction of its border with Armenia. If this border is destroyed, all of Iran’s northwestern regions will border Azerbaijan and Nakhchivan—and the number of Iran’s neighbors will decrease from 15 to 14. Iran will also lose one of its most crucial transit routes to the Caucasus, as the land route through Iran and Armenia that reaches Georgia is a main part of the Persian Gulf–Black Sea Corridor. The Iranian government’s decision to open a consulate in Kapan, the administrative center of Armenia’s Syunik Province bordering the Islamic Republic (Azatutyun.am, December 29, 2021) and the reciprocal decision of the Armenian government to open a consulate in the northwestern Iranian city of Tabriz (Tehran Times, June 18) clearly indicate Tehran’s desire to preserve and strengthen this transit route. Indeed, in terms of diversifying transit routes, Iran hopes to maintain this corridor (Iran-Armenia-Georgia) parallel to the North-South Corridor (Iran-Azerbaijan-Russia).

In a wider sense, Iran also has deeper concerns about geopolitical change and the balance of power in the region. In this context, Tehran considers the regional roles of Turkey, Israel, the United States and the North Atlantic Treaty Organization as extremely influential. From this point of view, Iran, unlike Russia and others, does not view the tensions in the South Caucasus merely as a “border clash” between Yerevan and Baku (Valdaiclub.com, January 18). In truth, opening the Zangezur Corridor would also provide direct military access for Turkey as a NATO member in the Caucasus.

Indeed, a significant number of Iranian elites and experts believe that Azerbaijani President Ilham Aliyev’s emphasis on “uniting the geography of Turkic world” via the Zangezur Corridor and the expansion of Turkey’s presence in the South Caucasus will strengthen Pan-Turkism in the region, which could incite ethnic and separatist sentiments (Mediamax.am, November 12, 2021). In addition, considering the close relations between Azerbaijan and Israel, Tehran is worried that, if Baku does capture the southern part of Syunik Province, this will bolster Israel’s intelligence, espionage and security presence vis-à-vis Iran.

As a result, although, among Iran’s 15 neighbors, its border with Armenia is the shortest, this 40-km border is of the utmost strategic importance for Tehran. Although the Azerbaijani authorities have stated many times that there is no real threat to the Iranian-Armenian border, Tehran’s reactions in the past two years and after the Second Karabakh War clearly show that Iran is extremely worried about the realization of the Zangezur Corridor by force, especially if this compromises its highly consequential border with Armenia.

It seems that the new diplomatic developments of the past two months have not reduced Tehran’s worries. In Prague, a quadrilateral meeting between the leaders of Armenia and Azerbaijan together with the presidents of France and the European Council took place, as well as the historic meeting of Armenian Prime Minister Nikol Pashinyan with Turkish President Recent Tayyip Erdogan. Yet, during both the meeting between Iranian President Ebrahim Raisi and Pashinyan on the sidelines of the UN General Assembly and the meeting between the Raisi and Aliyev in Astana, Kazakhstan, Iran’s opposition to changing international borders in the Caucasus was clearly emphasized. As such, Brigadier-General Mohammad Pakpour, commander of the Islamic Revolutionary Guard Corps Ground Forces (IRGC) announced that “the massive exercise dubbed ‘Eghtedar/Power’ of the IRGC ground forces will be held at the northern border in the Aras region at the regional IRGC Ashura military base” (Shargh Daily, October 13). Tehran’s decision to hold this military maneuver one year after large-scale military exercises near the Azerbaijani border, clearly shows that “Iran increasingly uneasy about threats to its common border with Armenia” (Eurasianet, Sptember 30, 2021).