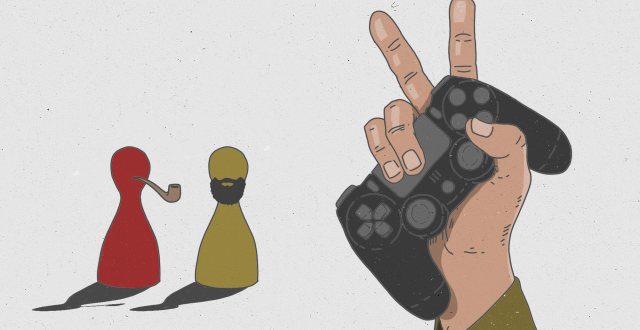 Battlefield scenarios from the wars in the former Yugoslavia in the 20th Century are used in various board games and video games, but while some of them offer the opportunity to play with history, others distort the facts completely.

In Serbia, World War II-era Yugoslav Partisan leader Josip Broz Tito and Chetnik movement leader Dragoljub ‘Draza’ Mihailovic are not just figures from history books and old movies, they can still be found battling each other, face to face – in a board game.

In the game ‘General Draza’ (‘Djeneral Draza’), players can choose to be the chief of the Communist Partisans or to command their rivals, the Chetniks, leading their forces through WWII in Yugoslavia with the aim of defeating the other side and eventually winning control over the country.

As well as the Mihailovic game, BIRN has identified at least five other board games themed around the wars in Yugoslavia in the 20th Century, as well as dozens of first-person shooter video games mostly set in the 1990s wars.

These shooter games are mostly customised versions – known as mods – of well-known video games. Some are made from a Serb, Bosniak or Albanian perspective, although they are not necessarily produced by Serbs, Bosniaks or Albanians.

Many of the shooter games offer a distorted view of history and are blind to the war crimes committed during the operations upon which they are based.

BIRN found two board games that focus on the wars that broke out as Yugoslavia collapsed in the 1990s.

‘War Returns to Europe: Yugoslavia 1991’ covers the period from June 1991 to early 1992, in the early stages of the violent collapse of Yugoslavia when Slovenia and Croatia were fighting to secede.

According to descriptions published on the Boardgamegeek website, an online resource for board gamers, the game is played by a Federalist player – basically the commander of the Yugoslav People’s Army – and a Separatist player, who represents “governments of the breakaway republics of Slovenia and Croatia fighting for independence and a free market economy”.

‘Brotherhood & Unity’ focuses on the 1992-95 Bosnian war. Designed for two or three players, it “simulates three distinct sides in the war: Bosniaks, Serbs and Croats – with no clear border separating them”, says the BoardGameGeek website.

“That provides an interesting set of choices to players: to attack or to fortify, whom to ally with, and when to change sides. That leads to many turnarounds and pragmatical alliances with former enemies – as was historically the case,” the website adds.

BIRN approached game designer Tomislav Cipcic for comment but he did not respond.

The video games based on the 1990s wars take their scenarios from military operations in Bosnia, Croatia or Kosovo and tend to be much more violently hostile and historically dubious than the board games.

In video games, “wars offer engaging backgrounds where classical power fantasies of particularly young men can play out”, explained Holger Pötzsch, a professor at the Department of Language and Culture at UiT the Arctic University of Norway.

“I think the popularity of the genre is due to such a mix of genre conventions, player expectations, and the framing of wars as arenas for glory and heroism,” Pötzsch told BIRN.

A recording of the video game ‘Operation Krivaja 95’, posted on YouTube in August 2021, shows armed soldiers lined up next to military trucks by a green meadow and woodlands under a bright blue sky.

The setting is Srebrenica on July 12, 1995. ‘Krivaja 95’ was the name of the Bosnian Serb Army’s operation to attack and seize Srebrenica, which at the time was a UN-protected zone. The operation ended with the killings of more than 7,000 Bosniak men and boys and the expulsion of some 40,000 women, children and elderly people.

In the game, the players, who are members of the Bosnian Serb Army’s Drina Corps, attacks their opponents, who are armed and fight back, completely unlike what actually happened in July 1995 to the Bosniaks of Srebrenica, who were rounded up and systematically massacred.

‘Krivaja 95’ is actually a modification, or ‘mod’, of the globally popular first-person shooter game ‘Arma’.

Pieter van den Heede, a historian at Erasmus University Rotterdam who studies depictions of historical conflicts in games, pointed out that ‘Arma’ is known for its mission editor, an editing program that allows the creation of customised content.

“What happens is that, when game developers introduce modding tools, they partly cede control over the type of content that is being made,” he explained.

“So that offers quite some space for, you know, more particular groups, like for example, a groups with a very clear Serbian focus or who want to very much promote the Serbian story on the events that unfolded in Srebrenica, it gives them the space to work on these things,” he added.

As well as ‘Arma’ mods that have a Serb perspective, BIRN found recordings of a game created from a Bosniak perspective that was based on the 1994 Operation Spider in north-western Bosnia, in which Serbian forces came to the aid of a local Bosniak strongman leader as he fought the Bosnian government.

BIRN also found at least over 20 mods of first-person shooter game ‘Battlefield Vietnam’ that had changed the scenario to events that happened in the Yugoslav wars.

There are games about the war in Croatia in 1991 like ‘Slavonija 1991’ and ‘Battle of Borovo Selo’, as well as the siege of Vukovar ‘recreated’ in three mods: ‘Fall of Vukovar’, ‘Battle of Vukovar’ and ‘Defence of Vukovar’.

There are also mods about the siege of Sarajevo, battles in Mostar and Operation Storm in Croatia, as well as about the war in Kosovo.

Kosovo war-related mods include ‘NATO and US Intervention’, ‘Battle of Drenica’ and ‘Battle of Junik’, which is available in two versions – ‘KLA Offensive’ and ‘Yugoslav Army Offensive’.

The war crimes committed during the Kosovo conflict are also overlooked.

Potzsch pointed out that “when creating a war simulation or game, you make decisions as to what to include and what to exclude”.

“In an expensive commercial product, you won’t want to antagonise your customers by presenting them with the true ugliness of war. You want them to play and most of your customers want to feel like unambiguous heroes on a mission for good,” he explained.

In the game ‘General Draza’, which covers the period from the autumn of 1941 to the summer of 1945, players can choose to be the nationalist Chetnik or Communist Partisan leader, but although German forces are part of the game, there is no option for a player to lead them.

The game focuses on the conflict between Mihailovic and Tito’s forces. Mihailovic was the first leader of a popular uprising against the German invasion of Yugoslavia in 1941, but became convinced that Communism posed a greater long-term threat and started to fight Tito’s Partisans.

Mihailovic’s Chetniks were accused of committing war crimes against Bosnian Muslims and Croats as well as against Communists. After Germany was defeated and Tito came to power in Yugoslavia, Mihailovic was tried and executed in 1946 for high treason and Nazi collaboration.

The Chetniks were banned during the Communist era, but regained popularity with the rise of Serbian nationalism in the 1990s. For some Serbs, Mihailovic is an icon of patriotism whose face can be seen on murals, T-shirts, mugs, calendars – and in board games.

Andreja Vrazalic, who created the ‘General Draza’ game, explained that although there were dozens of different military units on Yugoslav territory during World War II, “it was impossible to create a game with all the details from the war, it would suffocate the players”.

“I had to simplify things, so let’s say the [Nazi-allied Croatian] Ustasa, Home Guards, various legionnaires under German command and so on were reduced to one type of unit, I didn’t even introduce Serbian quislings in the Serbian version of the game (they will be represented in the English version), Hungarians are not included, et cetera,” he said.

Regardless of the historical facts of World War II events and outcome and history facts, debate in Serbia about the Chetnik movement is still very much alive.

Historian Jelena Djureinovic argued in her book ‘The Politics of Memory of the Second World War in Contemporary Serbia’ that after Yugoslavia began to collapse, Serbia reassessed World War II history and recast the nationalist Chetniks as Serb heroes.

As an ultra-conservative, Serb nationalist organisation, the Chetniks’ legacy has been embraced by right-wingers in contemporary Serbia who have used Mihailovic as a symbol. Last November in Belgrade, extremists painted a mural of Mihailovic next to one celebrating Bosnian Serb wartime military chief Ratko Mladic.

In 2004, Serbia adopted a law that gave World War II veterans from the Partisan and Chetnik movements equal rights. Then, in 2015, Draza Mihailovic was rehabilitated by Belgrade Higher Court.

During a state-sponsored event in Belgrade last year to mark the anniversary of Victory Day in World War II, Mihailovic’s picture was displayed alongside that of Tito.

Vrazalic explained that ‘General Draza’ is more of simulation than a game and consequently, it is more difficult for the Chetniks to win, since the circumstances were not in their favour.

“The Partisans have stronger assets in the long run, such as British or Soviet aid,” he said.

Vrazalic has also created a board game called ‘Hellfire over Kraljevo’, about a brief collaboration between the Partisan and Chetnik movements in the autumn of 1941 in the Kraljevo area of Serbia during an unsuccessful uprising against German forces.

‘1914: Serbien Muss Sterbien’ (‘1914: Serbia Must Die’), about World War I in the Balkans, is one of tens of thousands of war-related games in the BoardGameGeek database.

This strategic game, produced in 2013, is “a comprehensively researched model that explores the intriguing set of campaigns fought in Serbia in 1914”, according to the company that produced it, GMT Games.

It’s intended to be “an enjoyable game from which players can learn a great deal about the campaign and the geography of the theatre of war”, the company adds.

The game’s designer, Michael Resch, also created other games about World War I. Asked about his inspiration for the Serbian game, Resch explained that his grandfather was Viennese and fought in the Austro-Hungarian army.

He explained that his goal “was to produce a simulation game that allows players to ‘experiment with history’, but that each belligerent is restricted as he was historically. The players have the strengths and weaknesses that the generals faced in 1914.”

The game is for two players, representing Austria-Hungary and Serbia, and does allow for the possibility of the Austro-Hungarian player winning, unlike in the real-life historical battles. “However, it is not likely,” Resch said.

“Seems to be a very good simulation of the war in Serbia, this can mean long stretches of slow, meat grinder fighting interrupted with large scale retreats/withdraws to allow units to recover,” a reviewer from the US write on BoardGameGeek.

Another World War I board game called ‘March on the Drina’, named after a popular Serbian marching tune, is designed for four players – Serbia, Austria-Hungary, Germany and Bulgaria. The player representing Serbia competes against the other three.

The game covers the period from July 1914 to December 1918 and is divided into 14 different periods, through which players have to pass before the game finishes.

One of the game’s creators, Vukasin Nisavic, seems to have been motivated by patriotism.

Nisavic told Radio-Television Serbia that World War I in Serbia was “the period of our most glorious victory, the most glorious sacrifices; a period that is not mentioned enough nowadays”.

He explained that he wants the game to “save one of the brightest periods of our history from oblivion”.

Post Views: 271
Previous Mostar’s Unpunished Massacres, Part 3: The Long Wait for a Memorial
Next Week in Review: Games and Gambles