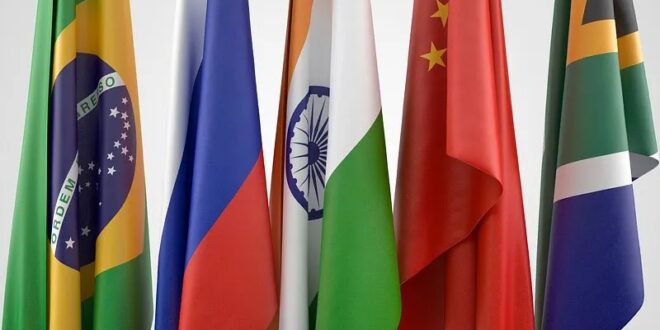 BRICS Is Becoming The Big Kid On The Block: Implications For Australia – Analysis

US sanctions as a weapon of war are having an unexpected affect. Russia, China, and Iran are developing alternative routes of trade and finance, and cooperation with other nations. Perhaps the biggest product of sanctions has been to encourage the rapid development of BRICS plus, now a very strategically important block.

BRICS was formed in 2001 as an economic association between Brazil, Russia, India, China, and later South Africa to promote cultural, trade and political cooperation between the members. BRICS has created a development bank, a Contingent Reserve Arrangement, a BRICS payment system, and a BRICS basket reserve currency. The estimated population of the grouping is 3.2 billion people, or 42 percent of world population. BRICS combined GDP represents around 26 percent of total world GDP.

BRICS is becoming closely interconnected with the members of the 9 member Shanghai Cooperation Organization (SCO), where influence across the Pan-Eurasian region is strong, Iran just being added as a new member. The SCO grouping has grown from the original Russo-Chinese security alliance, where central Asian Republics now have a multilateral platform for dialogue. This is a platform where India and Pakistan, as well as Iran and Saudi Arabia are holding bilateral talks.

Geo-political and geo-economic cooperation has been enhanced with the Belt and Road Initiative (BRI), where trade can expand into Africa and South America.

Iran and Argentina have applied for BRICS membership, while a host of nations including Egypt, Indonesia, Kazakhstan, Kenya, Mexico, Nigeria, UAE, Saudi Arabia, Senegal, Thailand, and Turkey are in close dialogue with BRICS.

Observers within the region state that interest in joining BRICS increased greatly after the US withdrawal from Afghanistan in August 2021. Iran, Saudi Arabia and Turkey are rumoured to be advanced on their respective negotiations to join BRICS within the next couple of years.

This would radically shift alignment within Eurasia where there would be a strong nexus between Riyadh, Tehran, Ankara, Moscow, Beijing, and Delhi. The objective here is to develop a commodity trade regime that would bypass the US Dollar. This would severely weaken primacy of the US Dollar as an international currency.

There are already moves by Russian, Chinese, Indian, and Turkey to use Rubles, Yuan, Rupees, Turkish Lire, and Rials as trading currencies backed by commodities and gold. Banks are bypassing the SWIFT system for their own. The system is also accommodating payments with commodities.

Since the Nord Streams incident, Turkey is interested in taking the lead as Russia’s gateway to the EU for gas exports. Turkey can then become the gateway to the EU from both Russia and Azerbaijan. This will connect Egypt, Greece, and make Turkey a major hub in Europe for energy. Russian pipelines to Turkey via TurkStream and Blue Stream pipelines already have a capacity of 39 billion cubic metres per annum. Balkan Stream will deliver gas to Europe. There are plans to rapidly expand these capacities.

These relationships are also benefitting this grouping militarily. Iran is now supplying Russian forces with a modified Shahed-136 kamikaze drones, proving much more effective than Russian drones on the battlefield.
Consequences for Australia

The rapidly changing regional order needs a new and up to date analysis. Vietnamese President Nguyen Phu Thong’s visit to Beijing at the invitation of Xi Jinping this month, signals an improvement in bilateral relations. China’s diplomatic, trade and investment relationships with the rest of ASEAN are now very strong. China is not seen as the adversary in the region, in the way Australia sees China. The recent announcement of stationing potentially nuclear armed B-52 bombers at Tindal Airbase in the Northern Territory, can be seen as provocative in the region. The Australian Government consideration to send advisors to Europe to train Ukrainian troops, complementing an already wide array of consultants, advisers, and mercenaries, together with weapons is not an act that will contributing to the lowering of tensions.

With India’s embracing of BRICS, it’s commitment in time of any conflict to the QUAD must be looked at very closely. The QUAD is portrayed as an important strategic agreement to Australia.

We have witnessed China de-couple trade with Australia. Why buy beef from Australia when it can be bought from Brazil? Expect more de-coupling as China utilizes the Belt and Road even more. With the sharp change in China’s business ideology, public enterprises are growing in influence and importance. Australian corporations must see these shifts and try to couple up with this change in the nature of China trade.

According to BRICS diplomats within ASEAN, Australian trade diplomats are already fighting a de facto trade war, where the booty is market-share. For example, trade diplomats have long informally agreed which markets should be deemed traditional for products from respective exporting countries. Breaking these informal agreements is considered an act of war, be it for beef, lamb, fruits, or services. Australia will not be retaliated by one country, but all the BRICS members, if it breaches these understandings. This is a trade war Australia cannot win and is damaging Australia’s reputation, where ordinary citizens are not even aware of.

The US pivot Mark I, II, & III to the Indo-Pacific in contrast, lacks the lustre of the Chinese advance into the region. They have been based upon the premise of competing rather than cooperating in mutual coexistence. One of the US misunderstandings is that China is not alone, it’s bringing a new trade regime with it to the region. Australia may have US military hardware on its territory, but through the cultural, political, and economic paradigms within the region runs the risk of isolating itself. These are areas the US alliance cannot assist Australia.