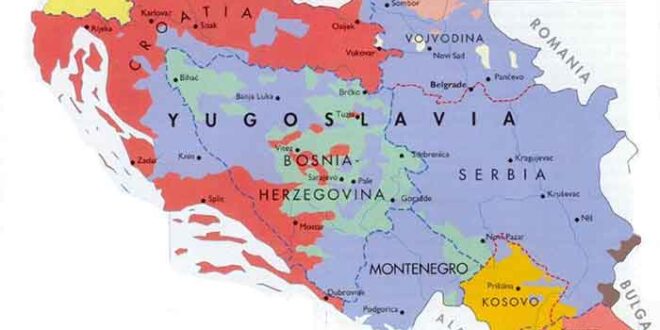 South-East Europe, and especially the Balkan Peninsula as the main part of it, have traditionally been the object of numerous geopolitical, geostrategic, and publicist analyses, as well as the subject of debates among the Balkan, European, and global experts in international relations. The new Iron Curtain or the Cold War 2.0 between western and eastern Europe was not the end of the Balkan’s importance for the US administration and NATO as well. At present, along with the Serbian and Macedonian national questions, the most controversial issue is the Albanian national question or, more precisely, the question of the Kosovo knot.[1] This question, as disputed between the Serbs and the American-supported Kosovo Albanian separatists, became a focal point of international relations once again in mid-December 2018 when the Albanians of the illegal and not-legitimate (quasi-independent) “Republic of Kosovo” unilaterally proclaimed the creation of the Kosovo Army with full backing by the US administration, therefore, blatantly violating several international documents, agreements and the principles of international relations but among all of them violating on the first place the 1244 Resolution by the UNO in 1999 regarding Kosovo status.[2] In other words, on December 14th (Friday) 2018 the “Parliament” of Kosovo approved the transformation of the Kosovo security force into a regular army. The reform was approved by 107 MPs in the 120-seat assembly. The Serbian minority MP from Kosovo, who were against the creation of the Kosovo Army along with Serbia’s central government in Belgrade, were not present in the “Parliament”.[3] Now it is quite clear why NATO, led by the American war criminals Bill Clinton, Wesley Clark, and Madeleine Albright (Madam Secretary),[4] bombed Serbia and Montenegro for 78 days in 1999 – to create a mafia (quasi) state of Kosovo[5] as another American political, economic, and financial colony.[6]

Nevertheless, the basic problem concerns security in a broader geopolitical framework, which is understandable, but at least as far as Western analysts are concerned, other issues have a priority such as human rights, democracy, and other issues that might become dominant in a given phase of crisis solving. The preservation of regional security and the creation of stable political-economic relations in the Balkan Peninsula are declaratively the priorities of the policy by Western members of the international community. At the same time, they estimate that currently the most important hotbeds in Europe are located in Kosovo, Albania, and West (North) Macedonia. However, it has to be noticed clearly that in all of those three “hotbed” countries the crucial troublemakers and warmongers are the ethnic Albanians but only if they are backed by the US administration as a history of the changing shape of the Balkans since 1990 shows.[7] The irony of the Western dealing with the Balkan security issue is that during the last 32 years there were exactly they, but especially the USA, who have been constantly fuelling the petrol on the Balkan fire and then trying to present themselves as playing the role of the firefighters.[8] It started with pushing Slovenia and Croatia towards independence from Yugoslavia in 1990/1991 and now it has to be finished with the creation of the (NATO) army of the “independent” Republic of Kosovo which will soon join together with the Republic of North Macedonia NATO pact – a notorious anti-Russian warmonger military organization but above all firstly to occupy North Kosovo populated by ethnic Serbs and to expel them from the region to Central Serbia.

As a matter of real fact, Yugoslavia was very well positioned at the end of the Cold War (1989) for the successful transition to political democracy, a market economy, and westernization. However, primarily due to the American policy, ex-Yugoslavia had ceased to exist and went down to the bloody ethnic wars due to the disintegration of the central governmental authority and the breakdown of political and civil order. The crucial issue, in fact, is that Western/US action to stabilize the Balkans not only failed to prevent the further spread of violence, ethnic cleansing, and genocide or to negotiate peace but, actually, exacerbated and directed the conflicts – the conflicts which were widely referred to as “Europe’s deadliest conflicts” since the WWII.[9]

Judged according to investments, natural resources (especially the reserves of black coal) and geostrategic elements, the province of Kosovo is worth at least 500 billion US $. Under the direct US umbrella, this fact favored Kosovo Albanian secessionist leadership in its efforts to assume the guidance of all Albanian people by the creation of a Greater Albania under the American protectorate, which might play a fundamental role in the American control of the whole South-East Europe. The premise “whoever has control of the Balkans controls the stability and the instability of Europe” has been put to good use by the Albanian leaders by destabilizing this part of the European continent during the last 32 years in order to benefit from the creation of the US-sponsored Greater Albania, i.e. by the generating a monopoly of power and might in the Balkans.[10] Their efforts are designed to provide the solution to both Kosovo Question and the Macedonian Question by involving (Western) international factors, to the point that internationalization of the problems is sought at any cost, including inciting and taking part in terrorist activities, devised to frighten the Serbian and Slavic Macedonian people and force them to emigrate and abandon the land to the secessionists.[11]

The political objectives of the Albanian secessionists in Kosovo and West ex-Yugoslav Macedonia encompassing both conventional and unconventional forms of activities by political parties, unions, and media, supported by terrorism, guerrilla, contraband, drugs smuggling, and violence of all sorts, are merely a mosaic revealing a rejection of the authority of Yugoslavia, Serbia, and Former Yugoslav Republic of Macedonia (today the Republic of North Macedonia), and collective resistance by the Serbian and Slavic Macedonian people and political parties, regardless of their political programs, party activities and attitude towards former, present or future governments.[12]

Kosovo-Metochia[13] and historical-geographical Macedonia are regions with enormous historical and civilizational importance for the European culture, especially in view of resisting the expansion of Islam in Europe. The last civil war in Bosnia-Herzegovina (1992−1995), concluded by the Dayton-Paris Agreement (November-December 1995), also represented an attempt by the Serbs to prevent the further penetration of Islam and Islamic fundamentalism and terrorism which became imported from Asia and Africa in the Balkans by the Bosnian-Herzegovinian administration of Alija Izetbegović[14] and, as well as, to stop the creation of the Balkan “Green Corridor” that was designed to link the Balkan Muslims with Turkey and further with the Arab Middle East.[15]

Part of this process includes the long-term effort of the Albanian leadership to create a Greater Albania, encompassing the present-day Republic of Albania, Kosovo-Metochia, as well as West Republic of North Macedonia, East Montenegro, and North-West Greece (South Epirus). Political strikes staged by ethnic Albanian miners and university students in Kosovo back in 1988 and 1989 have finally escalated into outbreaks of violence with tragic consequences, forcing Serbia’s government to take energetic measures to suppress anti-governmental, secessionist, and terrorist activities, and to re-establish normal life-conditions in this part of the Republic of Serbia. This is why at the beginning of the 1990s, Kosovo Albanian terrorist groups and their leaders adopted a new strategy, which was intensified in 1996 and 1997. It was characterized by the attacks focused on governmental institutions, Serbs, Montenegrins, and even ethnic Albanians, who were judged to be helping the reinforcement of the legal and legitimate authority of Serbia and the Federal Republic of Yugoslavia (Serbia and Montenegro).[16] However, since 2001, the same scenario is applied in the north-western regions of ex-Yugoslav Macedonia. In just a few months at the end of 1997 and at the beginning of 1998, the activity of the terrorists in Kosovo-Metochia (organized in the spring of 1998 as the Kosovo Liberation Army – KLA or the UÇK) caused the death of more than 70 citizens and members of Serbia’s police and Yugoslav Army’s forces. Such an escalation of violence in Kosovo-Metochia, Bosnia-Herzegovina, and ex-Yugoslav Macedonia, is the result of thorough preparations of Muslim secessionists who are getting the support of various Islamic countries, particularly by Iran, Turkey, and Saudi Arabia followed by different Islamic extremist militant institutions and organizations from the Middle East. However, the American administration was and is quite familiar with such a stage of the reality in the Balkans but, in fact, nothing doing in order to alter such reality. For instance, according to the US report from 1998, “world terrorist and national enemy № 1”, Osama Bin Laden, was several weeks in Albania’s capital Tirana coordinating and financing the KLA’s activities in Kosovo-Metochia. In the same year, Washington openly supported Kosovo Albanian separatists (the KLA), however, just several weeks ago the White House labeled it as a classical “terrorist organization”.

It is known that the US at that time close partner Saudi Arabia gave substantial financial aid to the Muslim government in Sarajevo during the last two years of the Bosnian-Herzegovinian civil war of course only after the American approval. Many indications suggest that the military activities of Albanian secessionists in West ex-Yugoslav Macedonia from 2001 are sponsored by some Islamic countries in first place by Iran and Saudi Arabia. However, in all of those cases of open radical Islamic terrorism on the soil of ex-Yugoslavia, including Bosnia-Herzegovina, the US administration became quite silent and, in fact, gave a “green light” to its “friend № 1” in the Arabic world – Saudi Arabia to further work on the creation of the Balkan “Green Corridor”.

Post Views: 204
Previous Istanbul Blast: PKK Rejects Involvement
Next Egyptians: We Do Not Want the Islamists to Return to Power