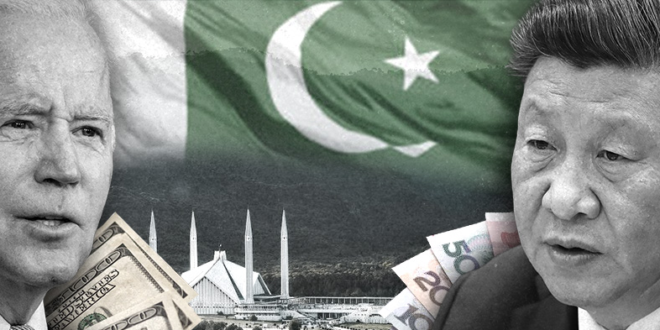 Pakistan is struggling to strike a balance in its relations with the US and China, as rivalry and competition between the two superpowers are set to spark geopolitical turmoil in South Asia. The growing tension in the region has made Islamabad noticeably ambivalent about its foreign policy postures.

Although Islamabad tries to maintain amicable ties with both countries, there seems a clear tilt toward China. Observers note that given Beijing’s huge investments in Pakistan, the country cannot take an overt pro-US stance anytime soon.

In addition, Islamabad has a growing debt to both the Chinese government and commercial banks, which it is now struggling to pay back.

The International Monetary Fund (IMF) reported last year that Pakistan owed $24.7 billion to China, which amounts to 27.4 percent of its total external debts of $90.12 billion.

Falling into a debt trap

This Chinese financial exposure is likely to further grow by year’s end, as per Pakistani Prime Minister Shahbaz Sharif’s assurances from Beijing earlier this month of an additional $9 billion in financial relief to roll over current payable liabilities and double China’s currency swaps arrangement with Islamabad.

Sharif was in China 1-2 November, no doubt consolidating those arrangements.

According to various media reports, China and Saudi Arabia have agreed to support Pakistan to relieve the pressure on its depleting foreign exchange reserves so that it can avoid a virtual default on foreign debts. Pakistan’s external debts have increased to $130 billion in the second quarter of 2022, from 128.9 billion in the first quarter.

The country’s foreign exchange reserves have dropped to the point where they are barely enough to fulfill two months of import requirements. Pakistan needs to pay back $24 billion by the end of the upcoming fiscal year and China is going to share the major burden of Pakistan’s debt-servicing liabilities.

Three recent events have hastened Pakistan’s disengagement from the US and driven it closer to China.

First, Islamabad’s bilateral relations with Washington have notably shifted as a result of the US withdrawal from Afghanistan in August 2021.

The latter state’s security situation has played a significant role in defining US-Pakistani relations during the past two decades. In this context, decreased US involvement in Afghanistan may also mean diminished relations with Pakistan.

Second, Pakistan’s inclusion in the US’ Financial Task Force (FATF) grey list in June 2018 has also strained relations with Washington and encouraged closer ties to Beijing. Pakistan was added to the FATF list for inadequate controls to deter terrorist financing and money laundering. This had serious implications for Pakistan’s banking sector, making it difficult for the state to access foreign capital.

During these turbulent times, economic assistance from China has been Pakistan’s major external source of relief.

“This is a two-way process involving reciprocity, other nations must also demonstrate neutrality in addition to Pakistan. Does the US maintain a ‘balance’ in its dealings with Pakistan and India, for instance? Does the US provide Pakistan with the same level of diplomatic, military, or financial support as China? Is the relationship built on mutual trust, consistency, or dependability on matters that are important to Pakistan?”

Beijing’s investments in Pakistan have gradually grown over the years, in contrast to those from Washington, which have focused mainly on Afghanistan and security matters – and not Pakistani national priorities.

Diplomatic ties between the US and Pakistan have existed since 1960 – at the height of the Cold War – when the US established local air bases to undertake covert operations against the Soviet Union.

Islamabad was a major recipient of US military and financial assistance when Soviet forces arrived in Kabul in 1979, and again in 1999, as part of the ‘war on terror’ in Afghanistan. This cooperation continued for decades, with the US military utilizing Pakistan as a conduit to transport supplies and personnel to its military forces in the neighboring state.

Unlike the US, Chinese companies have made significant inroads into a variety of Pakistan’s trade and industry sectors. A Chinese consortium purchased 40 percent of the shares of the Pakistan Stock Exchange in 2016, while Ant Financial, a subsidiary of the Chinese Alibaba Group, invested $184.5 million to acquire a 45 percent stake in the Pakistani Telenor Microfinance Bank in 2018, and Hui Coastal Brewery and Distillery Limited launched operations in Balochistan to produce beer.

Chinese investors also secured major stakes in cellphone manufacturing plants in Faisalabad and textile manufacturing facilities in Lahore. These business ventures are over and above the $62 billion Chinese investment in the China-Pakistan Economic Corridor (CPEC) – an integral part of President Xi Jinping’s ambitious Belt & Road Initiative (BRI) to connect Eurasia via roads, waterways, and railroads.

Despite growing friction in South Asia, Washington has not explicitly pushed Islamabad – yet – to choose between the two. It has, however, publicly voiced its concerns about Pakistan-China ties on on several occasions, warning that relations between the two “are not going to end well.”

In an interview with Pakistani English-language newspaper Dawn, Derek Chollet, a senior advisor to US Secretary of State Antony Blinken, said last month that “China is playing a role that in many cases is not consistent with what we think our interests are in South Asia, East Asia, Southeast Asia and all over the world.”

“Our relationship with each country stands on its own. This is why Pakistanis often feel that India has an unfair edge because Washington permits India to purchase cheap oil from Russia while banning Pakistan to do the same. And we share a lot of similarities with both countries,” he went on to add.

But Pakistani Senator Mushahid argues that both China and the US benefit from maintaining strong relations with Pakistan. “Given the current geopolitical climate, there is a US tilt towards India, with whom they are building a strategic partnership despite India’s Hindutva extremism and neutrality on Ukraine. As a result, Washington maintains a limited, tactical, but cordial engagement with Pakistan,” he says, while China is a steadfast ‘all-weather’ friend on which Pakistan can depend at all times, on all issues.

According to Mushahid, Pakistan experienced this “balancing” challenge between major powers in the 1960s when the state had to make foreign policy decisions to best serve its fundamental interests. “At first, the US opposed Pakistan’s ties with China but later asked Pakistan’s help in serving as a bridge to China,” he explains, pointing out the benefits of strong multilateral relations.

“There are only two issues that Pakistan is worried about,” he maintains. “What are our fundamental interests and how are they protected by our foreign policy choices?”

As the pressure mounts, Pakistan unveiled its National Security Policy (NSP) in January this year, which made it quite clear that Islamabad chooses not to involve itself in escalating tensions between the two big powers – and what it refers to as “camp politics.”

The NSP places emphasis on regional connectivity, which it says must take precedence over traditional foreign policy parameters.

Pakistan’s trade with China is expanding, although its primary commercial partner continues to be the United States, for now. As the country remains largely dependent on US exports and military equipment, it cannot afford to offend Washington and stifle US business investment and security cooperation at a time when relations with China are warming up.

Post Views: 224
Previous Revisiting the fall of Mosul: Who was to blame?
Next Fact check – Iran has not sentenced ‘15,000’ protesters to death