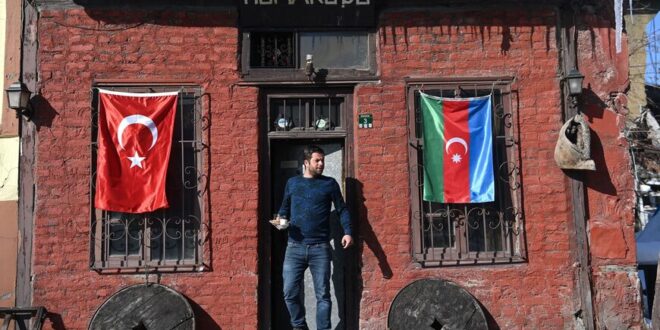 Iran is increasingly worried over Azerbaijani and Turkish geopolitical gains in the region as calls for “Greater Azerbaijan” push a hot button in Tehran.

Tensions are rising between Iran and Azerbaijan over Baku’s plans for a land connection to its exclave of Nakhchivan via Armenian territory, threatening to undermine Turkish-Iranian ties as well.

The wrangling between Tehran and Baku has escalated since Iran held military exercises on its border with Azerbaijan last month, including drills on crossing the Aras River, which forms part of the frontier. Simultaneously, Iran opened a consulate in Syunik, the southernmost Armenian province that borders Iran and is at the center of the tensions.

The hostile exchanges resulted in mutual notes of protests earlier this month as both the Azerbaijani ambassador in Tehran and his counterpart in Baku were summoned by the respective foreign ministries.

Apprehension is rife in Tehran that Azerbaijan, emboldened by its victory over Armenia in a 2020 territorial war, seeks to redraw borders by taking control of a strip of territory across Syunik, which separates Azerbaijan proper to the east and Nakhchivan to the west. As part of the cease-fire terms, Armenia pledged to allow transportation links between Azerbaijan proper and Nakhchivan — a route that Baku calls the Zangezur corridor and has threatened to secure by force if need be. Iran worries that Azerbaijani control of the strip could cut its border connection with Armenia. For Turkey, it would mean a direct land link with Azerbaijan via neighboring Nakhchivan and a route to Central Asia bypassing Iran.

Turkey’s military support was crucial for Azerbaijan’s gains in the war with Armenia. The two nations share common ethnic roots and language and enjoy close political and economic bonds. Azerbaijanis are called also Azerbaijani Turks and the two countries describe their bond as “one nation, two states.”

Azerbaijani President Ilham Aliyev said Nov. 8 the army was ready to defend the country’s interests, referring to Iran. “Those who conduct military exercises in support of Armenia on our border should know this as well. Nobody can scare us,” he added.

In early November, Azerbaijan detained 19 people on suspicion of espionage for Iran and planning acts against state security. The move followed Tehran’s claim that an Azerbaijani national who came from Baku was the main coordinator of the deadly Oct. 26 attack on a Shiite shrine in Iran.

In further finger-shaking at Tehran, Aliyev stressed the need to protect the rights and security of millions of Azerbaijanis “who unfortunately live outside the borders of Azerbaijan” — a reference to the large Azerbaijani minority in Iran — as he addressed the Nov. 11 summit of the Organization of Turkic States.

The media war, meanwhile, crossed more lines. In what Tehran sees as a separatist plot, the Azerbaijani media have revived discourse about a “united Azerbaijan” and references to “Southern Azerbaijan” — a term with irredentist connotations for Iran’s predominantly Azerbaijani northern provinces. Such rhetoric had been shelved since the overthrow of nationalist leader Abulfaz Elchibey in 1993.

Mahmudali Chehregani, the exiled leader of the South Azerbaijan National Awakening Movement, who has long been a persona non grata in Baku, now speaks on state television, vowing that “Greater Azerbaijan will bring the end of the hateful and chauvinist mullah regime” in Iran. His movement advocates the secession of “South Azerbaijan” from Iran and espouses the motto “Russians, Persians and Armenians are the enemy of Turks.”

In another example, Caliber.az, a website linked to the Baku government, reported, “The time has come: South Azerbaijan must secede from Iran,” while a TV presenter saluted “South Azerbaijan” as she removed her headscarf while presenting the weather for Tabriz, the main Azerbaijani-majority city in northern Iran.

During a visit to Baku shortly after Azerbaijan’s victory over Armenia in 2020, Turkish President Recep Tayyip Erdogan infuriated Tehran by reciting a poem lamenting the 19th century partition of Azerbaijan. Last month, Azerbaijan’s state broadcaster aired videos of people of various ages reciting the same poem, while the presenter said that Erdogan “sparked resistance” as “more than 30 million people living in South Azerbaijan rose up after [his recital of] the poem.”

Iran’s Sahar TV, which broadcasts in Azerbaijani, has responded with programs arguing that Azerbaijan is historically part of Iran and that Nakhchivan’s people want to join Iran.

Azerbaijan further angered Iran on Nov. 18 with its decision to open an embassy in Tel Aviv, a move that comes atop its growing defense cooperation with Israel.

Baku could hardly have flouted Tehran’s red lines to such an extent without knowing that Turkey stands staunchly by its side.

Ankara has backed Baku’s push for the Zangezur corridor, but tried to not antagonize Tehran by proposing a cooperation forum between all six countries in the region. Tehran’s reactions, however, suggest it sees Turkey’s gains as its own losses. For Tehran, Turkey’s plan to connect to Central Asia via the Zangezur corridor, bypassing the current Iranian route, threatens to shut Iran off from the Caucasus. Some even call it a “Turanist corridor.”

Turkey’s efforts to invigorate the Organization of Turkic States, which brings it together with Azerbaijan, Kazakhstan, Kyrgyzstan and Uzbekistan, have also unsettled Tehran. A stronger Turkish influence in the Turkic world, it fears, could destabilize Iran’s north, where the Azerbaijanis and other Turkic minorities such as the Turkmen and Qashqai peoples live. Furthermore, an Azerbaijan with a stronger standing thanks to Turkish support could become a center of gravity for its kin in Iran.

In their meeting in July, Supreme Leader Ali Khamenei told Erdogan that any plan that could block Iran’s border with Armenia was unacceptable. And President Ibrahim Raisi cautioned Aliyev in October that Iran would not tolerate “any change in historical borders, regional geopolitics and Iran-Armenia transit routes.”

The worries underlying Iran’s vision of the Zangezur corridor as a geopolitical threat can be summarized as follows:

Turkey says those concerns are unfounded, while Aliyev claims that Iran is angry for “losing a drug-trafficking route” to Europe. He also tends to see Iran’s escalatory moves as an attempt to distract attention from the anti-regime protests rattling the country.