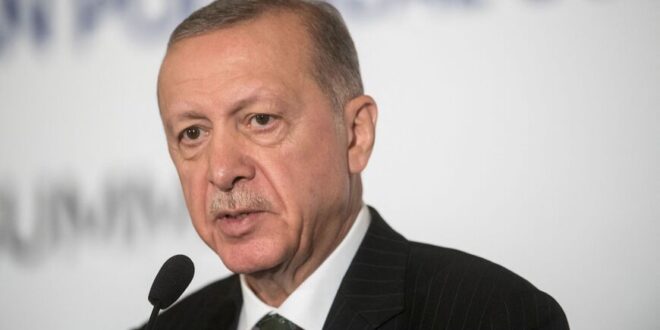 The Turkish president adds that “there is no resentment or bitterness in politics.”

Turkey’s President Recep Tayyip Erdogan has aired fresh interest in a possible meeting with Syrian President Bashar al-Assad, as Ankara is doubling down on its threat for a ground operation against Syrian Kurdish groups.

“A meeting with Assad is possible. There is no resentment or bitterness in politics,” Erdogan was quoted as saying by Turkish media Wednesday at the Turkish parliament. “Sooner or later, we will take steps.”

His statement marks the second of its kind within a span of two weeks as Ankara threatens to add ground operations in northern Syria to its ongoing air campaign. But for that step, Turkey needs the blessings of Moscow, which has long pressed both Ankara and Damascus to mend their ties.

“That is just vital,” Russia’s special envoy for Syria Alexander Lavrentyev was quoted as saying Wednesday by Russian TASS news agency. “Because those two countries are neighbors and they should be friends.”

Erdogan’s diplomatic foray came as part of Ankara’s multi-pronged push following the Nov. 13 Istanbul bombing attack aiming to turn up the pressure both on Russia and the United States. As the Turkish armed forces have launched a massive air campaign against the Syrian Kurdish groups, Erdogan has dialed up the rhetoric against Washington and Moscow.

“The forces who assured us that the regions they control in Syria would pose no threat to our country, have been unable to keep their promises,” Erdogan said, in an apparent reference to the United States and Russia.

Earlier in the week, Erdogan criticized Russia for “failing to fulfill its responsibility to clear out terrorists” in northern Syria under s deal reached between Ankara and Moscow in 2019.

Turkey has blamed the Istanbul attack, which killed six and wounded dozens, on the Peoples’ Protection Units (YPG), the backbone of the Kurdish-led Syrian Democratic Forces (SDF). The group denied any involvement in the attack.

Turkish airstrikes in retaliation, which began early Sunday Turkey time, targeted the SDF-controlled regions in northern Syria, hitting several sites, including a SDF base located next to the main US military base in Kobani, which is known to house US diplomatic delegations.

Erdogan reiterated the threat for ground incursion today. “As we proceed with our air campaign unabated, we will come down hard on the terrorists’ necks from land at the most convenient time for us,” he told his party members. He listed the targets as Tell Rifaat, Manbij and Kobani without identifying any time frame.

Turkey needs Russia’s OK for potential ground incursion, but the cautious tone from Moscow dimmed such a prospect. Lavrentyev said today that Russia had been in close contact with Turkey to prevent any further escalation.

Similar warnings have been echoed by Washington as well. The Pentagon called for an “immediate de-escalation” on Tuesday. Today US General Mark Milley, the Chairman of the Joint Chiefs of Staff, held a phone conversation with his Turkish counterpart Yasar Guler on “recent developments,” an official Turkish readout said.

Last spring, Ankara shelved its incursion plans in the absence of greenlights from Washington and Moscow despite high pitch threats by Erdogan and other government officials. Iran has also strongly opposed to the Turkish incursion.

Erdogan then floated the possible rapprochement in August, publicly announcing that ousting Assad was no longer his government’s goal in Syria. Yet, Ankara later took a step back with Ibrahim Kalin, a top presidential aide, saying there was “no political ground” for a possible meeting between the two leaders.

The Syrian government labels the Turkish military presence in Syria as an “occupation” and asks Turkey to withdraw from the territories it controls.

Lavrentyev’s remarks Wednesday might be marking a shift on the “political ground.”

“I think the signs and signals out there that Turkey and Syria are ready to somewhat meet each other halfway,” the envoy said, speaking on the sidelines of the so-called Astana talks, a trilateral mechanism involving Russia, Turkey, and Iran aiming to find a political solution to the Syrian civil war. Moscow and Tehran back Damascus in the conflict, while Turkey supports Syrian rebels fighting to oust the Syrian government.

As the Istanbul attack has further fueled the already-high anti-refugee sentiment in Turkey, Erdogan’s olive branch towards Assad has been also supported by his de facto political ally and leader of far-right Nationalist Movement Party (MHP) Devlet Bahceli.

Speaking on Tuesday, Bahceli also called for initiation of bilateral talks with the Assad government, “to form a joint front against the terrorist organizations.”