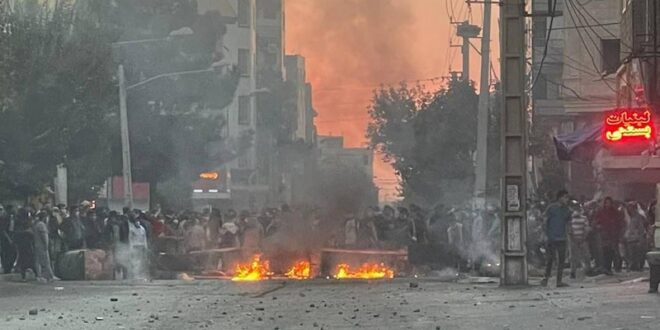 The protests across Iran are continuing as the Iran revolution 2022 campaign against the mullahs’ regime expands to more cities throughout the country. On Saturday when Iranian regime Supreme Leader Ali Khamenei held a session with members of the regime’s Basij, a paramilitary force affiliated to the Revolutionary Guards (IRGC), college students across the country and other people in Tehran and other cities responded by taking to the streets in night rallies chanting anti-regime slogans, including “Death to Khamenei!” “Death to the dictator!” and “Death to the Basij!”

Protests in Iran have to this day expanded to at least 255 cities. Over 660 people have been killed and more than 30,000 are arrested by the regime’s forces, according to sources of Iranian opposition People’s Mojahedin Organization of Iran (PMOI/MEK). The names of 528 killed protesters have been published by the PMOI/MEK.

In Sanandaj, western Iran, students and professors at the Islamic Azad University – Sanandaj Branch have begun their rallies on Sunday morning local time, protesting the regime’s continuing crackdown measures. They were seen chanting “Political prisoners must be released!” and “College students rather die than live in infamy!” Similar rallies and boycotts were reported in Tehran’s Amir Kabir University and Khajeh Nasir Toosi University.

In Isfahan, activists are reporting that truck drivers of the Shapour district have launched a strike. Truck drivers in Bandar Abbas, southern Iran, were seen continuing their strike for a second consecutive day.

On Saturday protests continued with more strikes by noble merchants and store owners in Zahedan. In Tehran, students at Amir Kabir University were seen boycotting their classes, protesting the arrest of their classmates and voicing solidarity with the ongoing Iranian revolution against the mullahs’ rule. Similar protest rallies were held in Pardis Faraby University of Qom, the University of Science and Culture in Tehran, and Isfahan University of Technology.

In other news on Saturday reports indicate that around 4,000 workers of Isfahan’s famous steel mill walked off and were on strike. Strikes were also reported by workers in Tehran and Alvand (Qazvin Province).

Protests continued in different cities throughout the day and intensified at night. Nightly rallies were reported in Tehran, Mashhad, Isfahan, and Karaj. Protesters chanted slogans against the regime and called for the overthrow of the mullahs’ rule. At the same time, they expressed their solidarity with the people of Sistan and Baluchestan Province and Iran’s Kurdish cities.

“The people’s solidarity is much more potent than the regime’s ability to sow discord and division. The willpower of rebellious protesters to bring down the theocratic regime is much greater than the regime’s hasty mobilization to preserve its rule,” the NCRI President-elect explained.

The protests in Iran began following the death of Mahsa Amini. Mahsa (Zhina) Amini, a 22-year-old woman from the city of Saqqez in Kurdistan Province, western Iran, who traveled to Tehran with her family, was arrested on Tuesday, September 13, at the entry of Haqqani Highway by the regime’s so-called “Guidance Patrol” and transferred to the “Moral Security” agency.

She was brutally beaten by the morality police and died of her wounds in a Tehran hospital on September 16. The event triggered protests that quickly spread across Iran and rekindled the people’s desire to overthrow the regime.

Post Views: 211
Previous The Case For Defense: How Russia’s War On Ukraine Has Proved France Right – Analysis
Next The Geo-Politics Of Natural Gas To Europe – Analysis