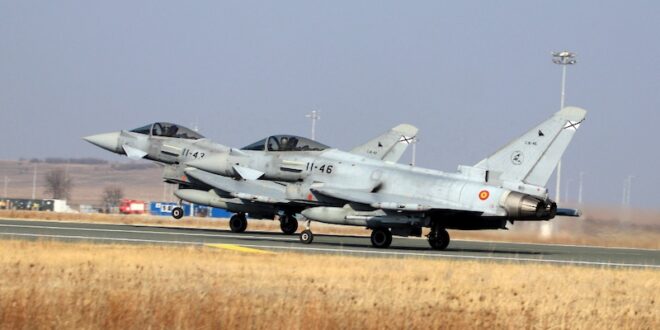 Deployed in Romania since May 2022, the MAMBA has been augmenting NATO’s Integrated Air and Missile Defence (IAMD) system. Allied fighters including F-16s from Türkiye, Spanish Eurofighters – currently deployed in Bulgaria on a NATO mission -, US E/A 18G Growler electronic warfare aircraft and French Navy Rafale fighters flying from the aircraft carrier Charles De Gaulle participated in the routine test of the system.

“In response to Russia’s war against Ukraine, we continue to strengthening our deterrence and defences in the eastern part of the Alliance”, said NATO Spokesperson Oana Lungescu. “This includes significantly increasing our air defences with more fighter jets and surveillance aircraft on patrol, more ground-based air defences and air-defence-capable ships at sea. Exercises such as this one ensure that NATO forces are able to operate together and remain ready to respond to any threat from any direction”.

The Surface-to-Air Missile Platform/Terrain (SAMP/T) system – also called MAMBA by the French military – is a theatre anti-missile system designed to protect the battlefield and sensitive sites, such as airports and seaports, against cruise missiles, manned and unmanned aircraft and tactical ballistic missiles.

“SBAMD systems like the French MAMBA currently supporting Allied Air Command’s Air Shielding mission in Romania are a key part of the Alliance’s IAMD system. Constant drills and training like this ensure crews are ready to detect and if required respond to air and missile tracks that may threaten their defensive area of operations”, said Brigadier General Christoph Pliet, Deputy Chief of Staff Operations, Allied Air Command.

NATO’s Integrated Air and Missile Defence System continuously guards and protects Allied airspace. In addition to French MAMBA system in Romania, Germany has deployed Patriot missiles to Slovakia the US has deployed Patriot missiles to Poland and the Spanish have deployed NASAMS systems to Latvia in response to Russia’s invasion of Ukraine. NATO IAMD is an essential, continuous mission in peacetime, crisis and conflict, safeguarding and protecting the Allies in this context, contributing to the Alliance’s indivisible security and freedom of action.