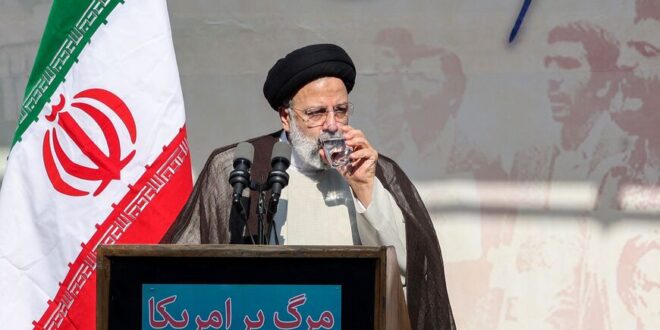 President Ebrahim Raisi made no reference to the killings of the protesters in the government crackdown and once again blamed the unrest on outside enemies.

Iran’s President Ebrahim Raisi described the public protests that have gripped his country since mid-September as “yet another disgraceful miscalculation” by “the enemy.”

Raisi made his comments in Sanandaj, Kurdistan province, one of the epicenters of the ongoing unrest in which scores of protesters have been killed, according to rights groups, and thousands more languish behind bars, awaiting hefty sentences.

“The enemies were under the impression that they could destabilize Kurdistan by inciting discontent, but they failed to mind the fact that the once young sapling of the Islamic Republic has now grown into a firm and stable tree in Kurdistan and other parts of the country,” he declared.

The Iranian president did not comment on the crackdown, nor did he promise any probe into the protester deaths, but praised the Kurdish minority for its “resistance” against the enemies of the Islamic Republic.

Iranian authorities accuse Kurdish opposition groups based in Iraq of provoking the protests that began in the Kurdish city of Saghez, the home town of 22-year-old Mahsa Amini, who died in morality police custody and became emblematic of the wider protest movement.

After his speech at an indoor sports center, Raisi was seen visiting the families of the “martyrs of security,” as Iranian state media outlets have named government forces killed during the unrest.

In the same city the same day, mourners observed the 40th day of mourning for Ramin Fatehi, one of the many Sanandaj protesters reportedly killed by government forces.

According to the Paris-based Kurdistan Human Rights Network, around a quarter of the 459 protesters killed hail from Iran’s Kurdish community. The latest to join the list was Awat Qaderpour from the restive city of Boukan, dead from injuries he reportedly sustained at a protest last month. He was buried under tight security before dawn on Thursday.

To crush the unrest in Kurdish areas, the Islamic Revolutionary Guard Corps (IRGC) have joined the crackdown, deploying machine guns and helicopters to the cities of Javanroud, Mahabad and Piranshahr, opening fire on protesters. State media organs have confirmed the shootings but described the targets as sympathizers of “separatist” groups.

While Raisi spoke of the unrest in the past tense, calls were making rounds on social media for a fresh round of three-day strikes and protests staring early next week.

A similar three-day campaign last month saw sweeping nationwide shutdowns that become one of the most violent episodes of the 10 weeks of unrest.

Iranian state media outlets downplayed the strikes as insignificant and sporadic. Yet in a document leaked by the hacker group Black Reward, the IRGC-linked Fars News appeared to have privately alarmed the IRGC commander about the scale of the strikes and advised him that “84% of Iranians” believe that the protests will lead to change.