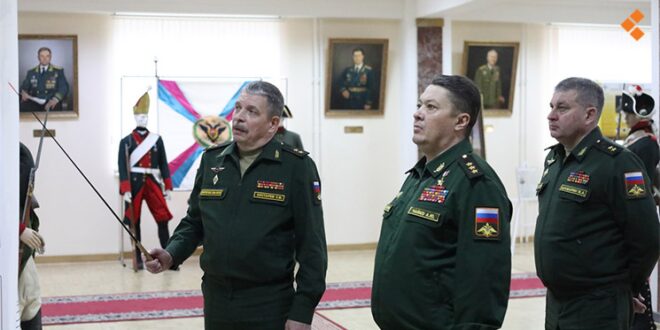 This is the second such visit in the past ten days, according to Athr Press.

At a time when Moscow is again trying to negotiate with the Syrian Democratic Forces (SDF) to reach an understanding that saves its areas from any Turkish military action in northern Syria, the commander of the Russian forces in Syria, Aleksandr Chaiku, arrived at Qamishli airport from the Hemeimeem base to meet with SDF leaders.

Quoting exclusive sources, Al-Mayadeen TV reported that “Chaiku will meet again with SDF leaders to discuss developments in northern Syria and Turkish threats to launch a new military operation in the area.”

The Russian delegation’s visit to hold meetings with the SDF is the second such visit in the past ten days. Confidential sources confirmed to Athr Press that, on November 27, a Russian delegation had arrived in the city of Hasakeh to hold a meeting with SDF officials. According to those sources, the meeting included a Russian offer to the SDF to convince Turkey to stop any military action targeting their areas.

At the time, the sources added: “The delegation asked the SDF to withdraw from the entire border strip and deploy the Fifth Corps instead of the Syrian army, but the SDF delegation rejected the offer, indicating that the Russian delegation should return to Hmeimim from Qamishli airport.”

The sources denied any official presence from the Syrian state for the meeting, which was held in the office of SDF commander Mazloum Abdi, at his residence in the Life Stone area, west of the city of Hasakeh.

Earlier, Turkish official sources had said: “The Russian side has been informed of Turkey’s non-acceptance of (the nominal deployment of the Syrian army forces) in SDF-controlled areas.” According to Al Jazeera Net, “Ankara has reiterated to Moscow the need to dissolve the SDF, or remove them from the areas of Russian influence in northern Syria.”