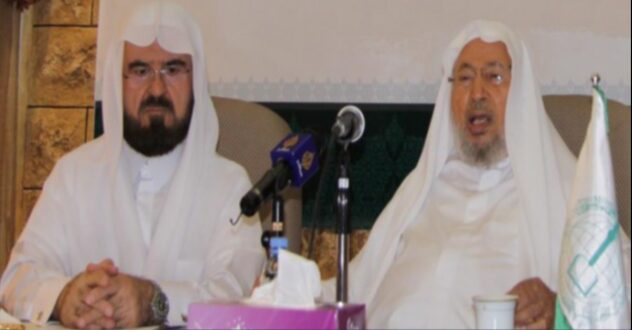 Though it is expected for students to follow in the footsteps of their mentors, the relationship between the late spiritual leader of the Muslim Brotherhood Youssef Al-Qaradawi and his longtime deputy, the secretary-general of the Qatar-based and funded International Union of Muslim Scholars (IUMS) Ali Al-Qaradaghi seems almost like an extension of Al-Qaradawi’s life. In fact, in the past few years, as Al-Qaradawi became ill, Al-Qaradaghi, a Qatari citizen originally from the Kurdish town of Qaradagh, emulated his mentor’s hardline views and positions on various issues including the demonization of the West, disdain for Christianity, blatant support for jihad, and using both traditional and social media. Al-Qaradaghi, who enjoys the backing of both Qatar and Turkey is also known for his vehement opposition to any effort toward normalizing relations with Israel and for his harsh criticism of the countries that have done so.

This report will highlight Al-Qaradaghi’s hardline views and positions, which he promotes to millions of people on multiple platforms, on various issues before and after Al-Qaradawi’s passing.

Al-Qaradaghi’s Position On The West

Like his mentor, Al-Qaradaghi often accuses the West of being hostile to Islam and Muslims, criticizes secularism as immoral, and encourages Muslim communities to maintain their Muslim identity. In an October 14, 2020 interview on Dorar TV (Sudan), Al-Qaradaghi said that French President Emmanuel Macron has a “Crusader ideology” and is a member of the far right. Claiming that the West is going through a moral crisis, he said that the West wants to get rid of its elderly people, and that it would have not done anything about COVID-19 if these were the only people that it affected.[1] On October 13, 2022, Al-Qaradaghi tweeted a comment on the Court of Justice of the European Union’s (CJEU) ruling that employers in the European Union can ban the wearing of headscarves as long as the banning is general and does not discriminate against employees. Al-Qaradaghi wrote: “What kind of justice is this? Why all this oppression? Are hijab-wearing women not part of the European community? Why all these violations against religiosity and religious freedom? European regimes claim that they do not seek to isolate Muslims and they impose laws that further isolate them.”[2] In October 2020, Al-Qaradaghi claimed that the murder of French history teacher Samuel Paty was planned and staged by the French authorities and “aimed at painting Islam and the Muslims as terrorist.”[3]

Al-Qaradaghi’s Position On Christians And Christianity

According to Al-Qaradaghi, “the Christianity that exists today is not the Christian religion that Allah sent down to Issa [Jesus], otherwise, how could Issa promote the Trinity… and more of this nonsense. How could he endorse the destruction carried out by Christians. I do not call them Christians. I call them Nasara because their affiliation with Prophet Issa is not an accurate affiliation. Those who call themselves Nasara or Christians are not related to Prophet Issa at all or his religion, the religion of monotheism. The religion of monotheism is Islam…”[4]

Incitement To Jihad And Support Of Hamas

On October 9, 2015, Al-Qaradaghi posted a tweet calling on all Muslims to take part in the Intifada to defend Al-Aqsa and Palestine whether physically, financially, or intellectually.[5]

In response to the U.S. decision to relocate its embassy from Tel Aviv to Jerusalem in May 2018, Al-Qaradaghi issued a statement in which he described it as a “declaration of war on Muslims and a step toward legitimizing an illegitimate occupation” and called for “a Palestinian, Arab, and Islamic uprising against this American aggression.” In the statement, he added: “Jerusalem is the cause of [our Muslim] nation and abandoning it or changing its identity will be a disgrace.”[6] Highlighting the importance of social media in spreading the message of Islam in an October 2018 scholars’ meeting organized by the Turkey-based Union of Scholars and Madrasas (Ittihad’ul Ulema), he was quoted as saying: “Social media is very important for the spread of the Islamic cause. Allah has commanded us to perform jihad and jihad is the greatest way to spread Islam.”[7] Al-Qaradaghi expressed his support for the Gaza-based Jihadi group Hamas on multiple occasions. For example, he tweeted on July 12, 2014, condemning those who question the effectiveness of the rockets which Hamas fires at Israel. He wrote: “Those who spread rumors would say: What is the benefit of the rockets that the resistance fires at Israel? I say, this is what is called a deterrence tactic. They are people who love life and fear death.”[8]

In an April 2015 interview with Al-monitor.com, when he was asked about the link between the International Union of Muslim Scholars (IUMS) and the Muslim Brotherhood, and Hamas, he said: “The union includes all Muslim scholars; be they union scholars, Sunni, Hamas-affiliated, Ibadi, Salafi, Zaydi, Sufi, or Tablighi. We view Hamas from the perspective of the Palestinian cause, which must remain the pre-eminent cause not only for the union but for all Arabs, Muslims, and free humanitarians of the world. We stand against the oppression, tyranny, displacement, and detention tactics that Israeli occupation forces rely upon; this is a humanitarian and international stance. Hamas is defending the rights of the nation, and the nation must stand by those who defend its pre-eminent cause.”[9]

Moreover, at a May 2021 rally in the Qatari capital Doha attended by Hamas political bureau head Isma’il Haniya, he said: “We have convened here today for the sake of the oppressed in Gaza, [who are] the emblem of honor, courage and sacrifice. We see that a procession of heroic martyrs, including women and children, has joined the martyrs who have gone before… They watered the blessed soil with their pure blood and nurtured the tree of jihad and resistance against the usurping occupiers. This will be the beginning of the uprising and victory, with Allah’s help.”[10]

Al-Qaradaghi’s Strong Opposition To Peace And Normalization With Israel

Not only has Al-Qaradaghi always maintained a strong opposition to peace and normalization of relations with Israel, but he is also among the harshest critics of the nations that signed the Abraham accords. He went as far describing normalization of relations with Israel an act of treason. Opposing the Trump administration’s “Deal of the Century” peace plan, Al-Qaradaghi stated in January 2020 that it is the religious duty of every Muslim to oppose the plan by every means and to sacrifice in order to thwart it.[11] As secretary-general of the IUMS, Al-Qaradaghi signed a statement calling on Muslim nations and Arab leaders to boycott the Peace to Prosperity workshop in Bahrain, which took place on June 25-26, 2019 to discuss the economic part of the Trump administration’s “Deal of the Century.” The statement also blasted the Arab leaders for “rushing toward the deal” instead of rejecting it and for falling over each other to serve the enemies. It warned them that the current and future generations may curse them and that Allah may condemn them for this on the Day of Judgement.[12] In a September 13, 2020 statement, Al-Qaradaghi condemned Bahrain for normalizing relations with Israel and described it as “impermissible” and “ultimate treason.”[13] He also called the normalization of relations between the UAE and Israel an “ultimate treason” in a video published on his YouTube channel on August 20, 2020.[14]

Years before the signing of theses Abraham accords, Al-Qaradaghi issued a fatwa ruling it would be impermissible for non-Palestinians to visit Al-Aqsa Mosque because it is under the control of Israel. In the fatwa, he urged Muslims to focus instead in taking part in the liberation of Al-Aqsa using all means.[15]

Al-Qaradaghi is active on both traditional and social media platforms when he is followed by thousands of followers. His access to millions of viewers through the Qatar-funded network Al-Jazeera and to thousands of social media users allows him to promote his radical views and the ideology of the Muslim Brotherhood around the world and makes him one of the most influential religious figures in the world. On Al-Jazeera, he is a frequent guest in the “Shari’a and Life” program, which initially was Al-Qaradawi’s platform where he would appear weekly to give an Islamic perspective to current events and answer viewers’ questions. Al-Qaradaghi maintains an active presence on Twitter, Facebook, YouTube, and Telegram. On Twitter, where he has almost 600,000 followers, Al-Qaradadghi has posted over 15,800 tweets since he joined the platform in October 2010. On Facebook, he has almost 1,000,000 followers and unlike on Twitter, his account is verified with the blue checkmark that confirms that the account belongs to him. His YouTube channel, which has over 7,000 subscribers, includes hundreds of videos of his sermons, lectures, and commentaries on global events. On Telegram, he has over 950 subscribers and has posted 50 videos, 145 photos, and shared 51 links. In addition to all these platforms, Al-Qaradaghi also has his personal website[16] that includes his articles, sermons, and fatwas.

Al-Qaradaghi’s Support For Qatar And Turkey

Since Qatar and Turkey are the two regimes that support the IUMS, it would not be surprising that Al-Qaradaghi goes out of his way to defend them and promote their positions on global events. One his most recent posts where he stepped up to defend Qatar was a tweet that was shared across his other social media platforms. In the December 1, 2022 tweet, he accused the Western media of being unfair to Qatar, most likely referring to the waves of criticism leveled at Qatar’s human rights record during the 2022 World Cup, and noted that “those who have noticed the unfairness of the West and the media distortion of the image of Qatar should say: The West [is the leading example] of injustice and its media [is the leading example] in spreading lies.”[17] On the same issue, he published a post on his Facebook account on November 29, 2022, saying that the criticism that Qatar has received recently was because of Qatar’s determination to maintain its Islamic values.[18]

Voicing his support for Turkish President Recep Tayyip Erdoğan’s July 2020 decision to convert the Hagia Sophia Cathedral from a museum into a mosque, Al-Qaradaghi tweeted on July 10, 2020: “Muslims’ mosques in Spain were converted to churches, bars, and night clubs. Babri mosque in India was converted into an idol’s temple. [The Jews] want to convert Jerusalem with all its sacred places into a Zionist capital. We have not heard any noise from the West or the West condemning these crimes. But converting Hagia Sophia into a mosque exposed the hostility of those with sickness in their hearts from the east and the West.”[19]

He also defended Erdoğan’s decision to impose emergency laws after the July’s 2016 failed coup attempt and told Turkey’s state-run Anadolu Agency that carrying out coups against the legitimate authorities is impermissible in Islam.[20] In the same interview, he condemned Western countries and accused them of applying a double standard for their criticism of Erdoğan’s emergency laws.