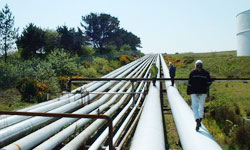 TEHRAN (FNA)- Iran and Pakistan will hold another round of dialogue on the proposed Iran-Pakistan-India (IPI) gas pipeline project and the provision of oil on deferred payment to Pakistan, Pakistani Petroleum Ministry officials said.

“Talks will be held in the next three to four weeks in Islamabad,” an official in the Ministry of Petroleum and Natural Resources said.

An Iranian delegation led by the country’s oil minister visited Pakistan to discuss matters pertaining to the supply of oil and gas to Pakistan, while Adviser to the Pakistani Prime Minister on Petroleum Asim Hussain led the Pakistani side.

“The upcoming negotiations are aimed at evolving consensus on a gas price fixation formula,” he added.

On April 30, Ahmadinejad met Indian Prime Minister Manmohan Singh and said that the two sides had decided to address the issue in 45 days.

Indian and Pakistani officials also announced earlier this year that they had resolved almost all bilateral issues including transit fee which saw New Delhi boycotting IPI pipeline talks for about a year.

India has more or less agreed to give Pakistan a transit fee of $200 million per year, which is equivalent to $0.60 per million British thermal unit for allowing passage of the pipeline through that country.

India and Pakistan finally agreed in February 2007 to pay Iran $4.93 per million British thermal units ($4.67/GJ) but some details relating to price adjustment remained open to further negotiation. There was a breakthrough in the talks in April 2008 when Iranian President Mahmoud Ahmadinejad visited Pakistan and India.

According to the project proposal, the pipeline will begin from Iran’s Assalouyeh Energy Zone in the south and stretch over 1,100 km through Iran. In Pakistan, it will pass through Baluchistan and Sindh but officials now say the route may be changed if China agrees to the project.

According to Indian ministry sources, the IPI gas pipeline is quite crucial for New Delhi as after signing of the agreement, 60 million standard cubic meters per day (mmscmd) of gas is expected to be supplied in phase-I, which will be shared equally between India and Pakistan.

In phase-II, 90 mmscmd of gas will be supplied to India and Pakistan. So far six meetings of the trilateral joint working group (JWG) of the participating countries have been held with the last meeting being held in New Delhi on June 28-29, 2007.

India, Asia’s third-largest economy, can produce only half the gas it needs to generate electricity, causing blackouts and curbing economic growth. Demand may more than double to 400 million cubic meters a day by 2025 if the economy grows at the projected rate of 7 to 8 percent a year, according to the Indian oil ministry.