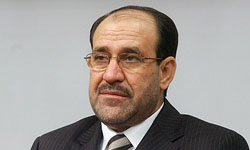 “We agreed to set up a joint service contract company with Iran… when Iraq witnesses stability and when the national unity government starts the reconstruction,” Maliki told reporters as he wrapped up a two-day visit.

“I personally hope that trade ties between the two countries will focus on quicker reconstruction and progress,” in Iraq, Maliki added at the end of his fourth visit to Iran since he took office in 2006.

The committee will be headed by Iraqi Commerce Minister Abdul Falah al-Sudani and Iranian Foreign Minister Manouchehr Mottaki, he added.

Iran’s First Vice-President Parviz Davoudi said meanwhile that the volume of trade between Tehran and Baghdad now stands at around four billion dollars, which they both hope to raise to 10 billion dollars.

Maliki arrived on Saturday seeking investments to rebuild his country which suffered considerable damage in the 2003 US-led invasion and the violence that followed.

The Iraqi premier’s trip was initially scheduled for late December.

Maliki, along with his entourage including his wife, left Tehran for the northeastern holy city of Mashhad Sunday night.

Post Views: 297
Previous Leader: No Peace Possible for Iraq with US Presence
Next Religious Plays Gaining Popularity in Iran Again