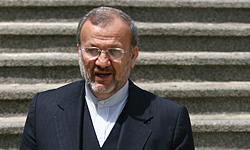 On the situation in the Gaza Strip, Yang said China is seriously concerned and deeply worried about the grave humanitarian crisis caused by the escalation of the Israeli attacks on Palestinians.

China has made unremitting efforts to promote adoption by the United Nations Security Council of a relevant resolution on Gaza, Yang said.

He said China welcomes and supports UN Security Council Resolution 1860 and urges all the parties concerned to fully honor the resolution, cease fire immediately, ensure smooth operation of humanitarian assistance and promote an early relaxation of the humanitarian crisis taking place in Gaza.

Israel has defied the UN resolution and is continuing its onslaught against the Palestinians as of early Saturday morning.

China has always proposed that the issue of Palestine be resolved through political negotiation on the basis of related UN resolutions, the “Land for Peace” principle and the Arab Peace Initiative, he added.

The Iranian foreign minister also earlier discussed the latest conditions in Gaza and ways to aid Palestinians in the coastal area in separate phone calls with counterparts from Norway, Netherlands, Syria, Libya, Turkey and Japan.

In a phone talk with Syrian foreign minister, Mottaki noted the US efforts to stonewall issuing a Security Council resolution against Israel, and said the new developments in Gaza signals another disgraceful failure of the illegitimate Zionist regime, similar to the Lebanon’s war in 2006.

Criticizing the submissive behavior of international organizations in this regard he named the main factors to speed up ending the crisis as immediate cease of Israeli attacks on Gaza and opening border crossings to the region.

Syrian Foreign Minister Walid Mualem, for his part, underlined continuing regional negotiations and emphasized considering Hamas ideas and recognizing rights of Palestinians are the only ways to reach a better situation.

Libyan Foreign Minister Abdel-Rahman Shalgam also said in his phone conversation with Mottaki that the anti-Israeli resolution aimed to put an end to the military offensives and open the border crossings to the coastal area.

Japanese Foreign Minister Hirofumi Nakasone expressed serious concern over the crisis and called for the termination of assaults and siege of the Gaza Strip.

Also Turkish Foreign Minister Ali Babacan who was in New York for the Security Council meeting emphasized any decision to be made in this regard must consider Hamas viewpoints.

The Norway’s Foreign Minister Jonas Gahr Stoere also asserted in his phone talks with Mottaki that his country holds independent stance regarding Gaza issue and respects the democratically-elected government of Palestine and emphasized an immediate ceasefire.

Also the Netherlands’ Foreign Minister Maxime Verhagen said the country is seriously asking for ease of dispatching humanitarian shipments to the crippled region and end of massive military operations.

He then said the EU is willing to reach the peaceful objectives through cooperation with Iran that holds great influence on Hamas and Palestine.