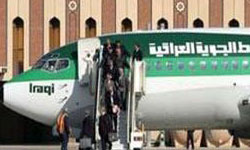 TEHRAN (FNA)- The Iraqi transport ministry activated an agreement with Iran to operate lines for flights between the Baghdad and Najaf airports, on one hand, and the Mashhad International Airport in Iran on the other, a senior advisor for the transport minister said.

“The lines between Baghdad and Najaf in Iraq and Mashhad, a city in northeastern Iran, will be operated for the first time,” Esmat Amir Jayyad told Aswat al-Iraq news agency.

The director of the Najaf deputy governor’s office, in statements to the press on Tuesday (Jan. 6), had said that flights will be operated between the Najaf International Airport and each of the Cairo, Amman and Mashhad airports.

The Baghdad International Airport had arranged the first direct flight between Baghdad and Tehran on December 1, 2007 for the first time after a three-decade hiatus.

Iraq-Iran flights had stopped after the Iranian Islamic Revolution in 1979 followed by a period of intense relations due to an 8-year Iraqi imposed war on Iran in the 1980s.