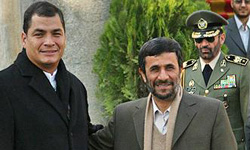 TEHRAN (FNA)- Ecuador said the country hopes it can receive the required volume of credit from Iran to accomplish its oil projects, following rapid development of relations between Tehran and Quito.

“We are asking for a credit line of $280 million, especially to invest in our pipelines. We are sure that this money will come,” the country’s Mining and Oil Minister Derlis Palacios said in a telephone interview to Dow Jones Newswires reporters.

Palacios said that the relationship between Ecuador and Iran has been revitalized after President Rafael Correa visited Iran last December.

Palacios didn’t give more details about the loan but he said that next week Iranian officials will come to Ecuador to analyze the exploration and development of natural gas and crude oil in the coastal region and to talk about a possible joint venture with state-owned Petroecuador to develop Block 31.

Last month Correa said Iran will provide modern technology to Ecuador for natural gas exploration in the Gulf of Guayaquil.

During his official visit to Iran, Correa said Iran could also collaborate in a petrochemical project in the coastal Manabi province. During that trip, the Export Development Bank of Iran offered a credit line of $40 million for Ecuador to broaden banking and trade transactions between the two countries.