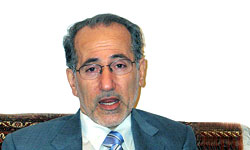 The Iraqi official made the remarks in a meeting with Iranian Foreign Minister Manouchehr Mottaki here in Tehran today.

Rubaie had also earlier said that his country is determined to implement its decision for closing the MKO headquarters in Diyala province.

“Iraq has made a decision for Ashraf camp and will implement it firmly,” Rubaie told reporters following his arrival at Tehran’s Imam Khomeini International Airport on Monday.

Also at the meeting with Mottaki, Mowaffaq al-Rubaie voiced concern about enemies’ plots for sowing discord and animosity among different religious and ethnic groups.

On the US troops’ withdrawal agreement, he said that the Iraqi nation should still approve or reject it after expiring the deadline for their pullout.

Noting that Iran and Iraq security is interwoven, Mottaki, on his part, said that Iran attended talks with the US because of Iraq’s security.

He urged Iraqi government to release all Iranian detainees from the country’s prisons.

Mowaffaq al-Rubaie also met with Iranian Parliament Speaker Ali Larijani Tuesday evening in which the Iranian official stressed the importance of sovereignty and independence of Iraq in the region.

Calling for security arrangements by the regional countries, he emphasized that Hamas victory turned a new page in regional developments despite enemy plots.