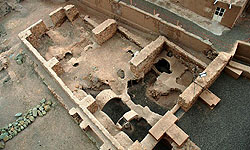 TEHRAN (FNA)- Iranian archeologists have found a unique form of Parthian burial in the country’s Nakhl-e-Ebrahimi village in Hormozgan Province.

The second phase of Nakhl-e-Ebrahimi archeological excavations yielded 10 jar burials and a fetal burial, which is the first of its kind found at the site.

“The team also found a piece of earthenware in the grave,” said director of the archaeology team, Siamak Sarlak.

“Archeologists also excavated the ruins of a Parthian fortress, previously found at the site, and unearthed 40-50 meters of the structure’s northern wall,” press tv quoted him as saying.

Covering an area of 15,000 square-meters, the fortress is believed to be the largest Parthian fort found in Iran.

The architectural finds of the area will be restored at the end of the second phase and the fortress will be refurbished based on its original plan, Sarlak concluded.