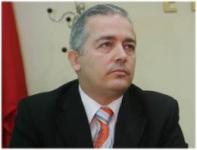 Albania’s Prime Minister Sali Berisha on Tuesday fired the country’s highest tax official who is currently on trial on charges of torture and murder.

Arben Sefgjini, head of the General Directorate of Taxes, previously served as the head of Tirana’s Secret Service Office, SHIK. Three of his former colleagues, Budion Mece, Avni Kolladashi and Ilir Kumbaro, have also been charged with the 1995 torture and murder of Remzi Hoxha, a Macedonian-Albanian.

The four former SHIK officers are accused of abducting Hoxha, Zizo Kristopoli and Avdyl Loshaj on October 21, 1995. Prosecutors believe that after being placed in a SHIK safe house in the town of Lezha, in northern Albania, the three were tortured by the defendants, while Hoxha died as a result of wounds inflicted during the torture.

Berisha had formerly defied calls to sack the head of tax office even when he was temporarily placed under house in May. The Albanian Appeals Court had later freed Sefgjini after finding that he did not present a flight-risk.

The reasons behind the abduction and torture remain unclear.

Local media have alleged that Hoxha was witness to a conversation in Macedonia between then President Berisha and former Serb strongman Slobodan Milosevic, in which they agreed terms for smuggling oil during the 1992-95 Bosnia war. Berisha has declined to comment on the allegations, but in 2005 admitted tolerating the smuggling trade between Albania and Montenegro for “humanitarian reasons,” to relieve Montenegro and Kosovo of the hardships of the UN embargo. Critics say that the money fuelled Milosevic’s war machine in Bosnia.

The defendants all pleaded not-guilty when they were arraigned before the High Court in Tirana.