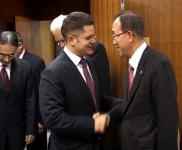 Serbia’s Foreign Minister Vuk Jeremic visits the United Nations on Thursday for meetings with UN Secretary General Ban Ki-moon and other top diplomats to discuss the implementation of the six-point plan in Kosovo and the formation of the Kosovo Security Forces.

Jeremic has also sent letters to 80 countries around the world asking them to submit statements on Kosovo to the International Court of Justice, which in the coming 2-3 years is due to consider whether Kosovo’s independence declaration was in line with international law.

“I would kindly ask you to consider submitting a written statement to the Court of Justice expressing your country’s official position on this matter of paramount importance by April 17, at the latest,” states Jeremic in the letter quoted by local media.

The minister stresses that the ICJ’s ruling will “establish a powerful premise with far-reaching ramifications” as “the outcome will either strongly discourage other separatist movements from attempts at secession, or will bring a result that could encourage them to act similarly.”

“As a result, separatist groups throughout the world will receive a fresh example of how to realize their ambitions. The international system will become unstable, uncertain and unpredictable,” he notes.

On October 8, 2008, the UN General Assembly adopted a resolution seeking the ICJ’s advisory opinion on the legality of Kosovo’s independence declaration. Of the total 192 General Assembly members, 77 voted for, six against, while 74 abstained.

Jeremic’s letter is addressed to UN members that have still to recognize Kosovo, that endorsed Serbia’s initiative at the UN General Assembly, or stayed neutral. Local media said Spain and Russia have officially confirmed that their legal teams are preparing statements for the ICJ, while Venezuela and Cyprus are also about to follow suit.