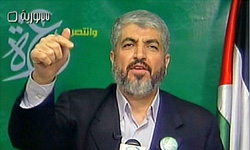 TEHRAN (FNA)- Hamas politburo chief Khalid Meshaal is due to participate in a Tuesday session of the Iranian parliament, Parliament Speaker Ali Larijani announced on Sunday.

Meshaal will brief the Iranian lawmakers about the latest developments in the region and Gaza Strip, Larijani added speaking to an open session of parliament.

Meanwhile, he lauded Prime Minister Recep Tayyip Erdogan’s position against Israeli crimes in Gaza during the World Economic Forum in Davos, Switzerland and said he acted bravely and his act is worth appreciation.

He was given a hero’s welcome when he returned to Turkey from Switzerland.

In Tehran on Saturday a group of protesters rallied outside the Turkish Embassy in support of Erdogan’s actions. They chanted anti-Israeli and anti-American slogans, and some schoolchildren in the crowd carried flowers.

The new US envoy to the Middle East, George Mitchell, is due to meet Erdogan in Turkey on Sunday.