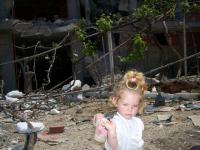 A World Bank project meant to safeguard Albania’s coastal zones was used to selectively demolish parts of a village in southern Albania and leave many families homeless, according to an internal report , which additionally notes allegations of corruption and efforts by World Bank officials to cover up the events .

An internal report of the International Development Association, IDA, obtained by Balkan Insight, shows that a World Bank project on coastal zones management in southern Albania aided the demolishment of informal settlements in the village of Jale, in disregard to the Bank’s policies of forced displacement.

The investigation by an inspection panel found that World Bank management failed to comply with its policies with respect to the design, appraisal and implementation of the project, harming the local people affected by it. The probe also found that WB assisted the demolition by pressuring local construction police to take action and by supplying them with equipment and aerial photos.

In a statement for Balkan Insight the World Bank conceded “that mistakes were made in the project, and that ways to address the alleged grievances of those affected are under active consideration.”

“The World Bank is concerned about the errors that were made by management and staff in the context of the project. In accordance with our internal processes, the Bank is reviewing actions of its staff, and, if warranted, will take appropriate action,” the statement said.

The village of Jale is situated on the coast the Ionian Sea, on the road linking the port of Vlora with Saranda, and is considered by many as one the most beautiful hamlets on Albania’s Riviera. Two authors of children’s books who come from the area have featured its deep blue waters and sandy beaches often in their books, giving it the image of paradise on earth.

The families residing in the village have a history dating back 300 years, owning small plots of land that were handed down from father to son.

The area was neglected by the Stalinist regime of the late Enver Hoxha, its landscape spared the mass industrialisation that blighted other parts of the country. When the regime imploded in 1991, the majority of the houses in the village were little more than shacks, and most of the residents left for Greece and Western Europe to seek a better life.

After a decade of tumultuous transition to democracy, the tourism industry started to slowly recover, remittances started flowing, and the village experienced a renaissance.

The old houses serving the growing numbers of tourists were suddenly not big enough. Residents applied for building permits but were refused because the area was outside planning zones. Driven by economic necessity and the reality of wildcat construction everywhere in the country, they pushed on, iainly adding rooms within their fences.

By 2006, when Albania adopted a law for the legalization of illegal construction, the houses in Jale were a fraction of the estimated 220,000 unauthorised buildings across the country.

The villagers applied to legalize their buildings under the new law but none of them obtained a conclusive answer. On April 3, 2007, they were notified that their houses were illegal and would be demolished.

They launched an appeal at the local court, but construction police did not wait for the case to come to trial, and on April 17, 2007 surrounded the area and demolished all newly built houses in the village.

“They [police] surrounded the village like we were in state of war”, recalls Vasilika Koka, who saw her parents house in ruins. “All that police forces, snipers in watching positions, for three days the road was blocked and no one could bring even food.”

As they proceeded over the pleas and curses of the villagers, the construction police would tell the residents that they should not worry.

“You are crying now, but don’t worry, you will be eating with silver spoons soon as this is part of big World Bank project and they will invest and take care of you,” a construction police officer said according to the locals.

The televised scenes of the demolition caused a furore. The head of the Union of Civil Liberties party, Vangjel Dule, who represents the area in parliament, slammed Prime Minister Sali Berisha, arguing that the demolition was being done for business interests close to him.

“In the [demolition] process are illegally hidden sinister interests linked to Berisha,” said Dule at the time in parliament.

Berisha denied any ulterior motive, and a spokesperson said he “has only one interest, the law and only the law, and any interpretation beyond the legal context is a speculation and untrue.”

One week after the demolitions, then Minister of Transportation Lulzim Basha told parliament that the demolition was a result of the World Bank project on Integrated Coastal Zones Management and Clean-Up.

“The demolition was a must because of the World Bank project in the area, the Bank asked for it,” Basha said.

According to the report, project records indicate an active relationship between the project and the construction police, because of the fact that aerial photography financed under the project identified the buildings to be demolished.

The probe also found that the project provided equipment to construction police to carry out the demolition, including digital cameras, GPS and computers.

In March 2007, some two weeks before the demolition order, the project coordinator, Jamarber Malltezi, the son-in-law of Berisha, sent a letter to the head of the construction police asking the demolition of the houses without a permit in Jale. Attached to the letter were two CDs with the aerial photography financed by the project, indicating the houses to be demolished.

Several articles published in the local media later linked the process to the project coordinator and indicated that that it was being carried out to make way for a tourist resort.

According to the investigative panel the World Bank at some point prepared a press release to address the allegations, but in the end did not issue it, choosing not to deny them publicly.

Contacted by Balkan Insight, Malltezi rejected the allegation that appeared in the local media in the aftermath of the demolition.

“The articles were conned and paid for [by someone],” he said, adding that he had denied any wrongdoing on his part at the time as well, but the local press had not published his reply.

Malltezi characterized the report of the inspection panel as biased and not factual, and said that in February the World Bank would compare the report with another report filed by management in response to the allegations, before its board of directors reaches a decision.

The Bank confirmed to Balkan Insight that its Board of Executive Directors will meet to discuss the report of the investigative panel as well the management’s response. This Board Meeting is expected to be held in mid-February, after which time the reports prepared by the Inspection Panel and Management will be made public.

The investigative panel arrived to the conclusion that the Wold Bank failed to comply with its policies on involuntary settlement, and this failure can be traced as back as the time of the appraisal of the project in 2004.

It also concluded that World Bank’s management response “was particularly unhelpful and non-informative and at times in total conflict with factual information that had been long known to management.”

Although the panel does no mandate necessary compensation it points out that “some of the people affected seem poor and vulnerable and they claim the demolition took away their life savings and need assistance to rebuild their lives.”

In a memo send on November 24, 2008, with the report attached , the investigative panel expressed its concern to the Bank’s Executive Board of Directors on what it calls “misrepresentation of the of facts” by bank management and staff.

“We are disturbed to report that during its investigation the panel received certain documentation that misrepresented critical project facts,” reads the memo.

According to the memo in one instance a crucial statement in the project appraisal documents stated that an agreement had been reached with the Albanian government to halt demolitions in the project area until certain procedures and criteria were in place, however the panel discovered during the investigation that the statement was not true.

According to the panel, staff and bank management hampered its access to critical data and project documents which were later provided only at the panel’s insistence.

“During the investigation some staff gave the impression of being pre-interviewed,” notes the memo. “In one interview there was even a refusal to answer a straightforward factual question on the grounds that management was going to produce an official response.”

The investigative panel concludes that it encountered unusual difficulties in having access to accurate and complete information.

“It may be an exceptional case, but that fact that it happened is of great concern,” the memo states.