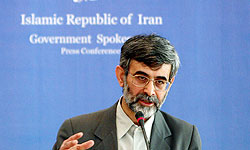 TEHRAN (FNA)- Iranian Government Spokesman Gholam Hossein Elham on Monday described the capitalist school of thought as the root cause of the present crisis in the West.

“Capitalism has come to a serious crisis and has no way out,” Elham stressed.

He further pointed to the remarks by the Late Founder of the Islamic Republic, Imam Khomeini, that the problems facing the world capitalists lies in their ideology, Elham reiterated, “The West’s capitalist system has now fallen out of a frying pan into fire due to their ignorance of the aforementioned remark (by Imam Khomeini).”

“Today we are witnessing that Marxism which was attractive as a manifestation of Justice…was baseless and a mirage,” the Iranian government spokesman said.

He also predicted rapid collapse of Liberalism school of thought in the near future.

Iranian President Mahmoud Ahmadinejad had said earlier in November that the independent states are expected to look for a new way for their progress in light of the end of capitalism.

Elsewhere, Elham supported Turkish Prime Minister Recep Tayyip Erdogan’s stance against Israel in Davos forum and added, “The move showed that the Islamic Revolution (in Iran) has had its effects on the government’s (current) disgust for the Zionist regime.”

Erdogan walked off in front of UN Secretary-General Ban Ki-moon and other panel members complaining that his comments on the Israeli onslaught against Gaza were cut short by the Washington Post’s moderator David Ignatius.

Post Views: 284
Previous FM: Middle East Issue Too Hard for Blair to Solve
Next Iran: No Invitation Needed for Talks with US