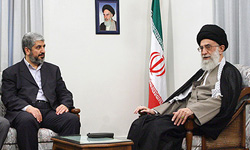 THERAN (FNA)- Supreme Leader of the Islamic Revolution Ayatollah Seyed Ali Khamenei urged the Palestinian people to be alert to any possibility.

Praising Palestinians’ victory in the 22-day war against Israel, Ayatollah Khamenei said in a meeting with Hamas politburo chief Khalid Meshaal on Sunday that Iran is prepared to help the oppressed people of Gaza to reconstruct the territory.

The Iranian supreme leader also urged the trial of the Zionist regime leaders for committing war crimes against the people of Gaza in the recent war.

Noting the psychological war for distorting the truth about the Palestinian Islamic resistance, he added that Gaza war is not over yet and the decisive stance of the Palestinian people and their resistance is the only way to confront enemies.

Meshaal, for his part, lauded Iranian government and people’s support for the Palestinians and briefed Ayatollah Khamenei on the developments during the 22-day Israeli onslaught on Gaza.

The humanitarian situation in the impoverished strip with over 1.1 million residents is at its worst and Israeli three-week military operation on it has exacerbated the already dire humanitarian crisis by destroying civilian infrastructure during the invasion.

The Zionist regime has refused to open the crossings into the Gaza Strip despite international calls for lifting the siege.

Nearly 5,000 houses were destroyed , thousands of people have become homeless and more than 1,400 Palestinians have been killed during the Israeli incursion.