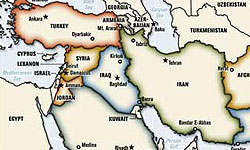 TEHRAN (FNA)- Iran and Iraq are negotiating a new memorandum of understanding that will substantially increase the number of Iranian pilgrims visiting the country.

Iraq’s Tourism and Antiquities Minister Qahtan Abbas is leading the negotiations with a visiting Iranian delegation on a deal that will facilitate travel between the countries, according to Abdulzahra al-Talaqani, the ministry’s spokesman.

Talaqani said Iraq wanted to increase the number of its pilgrims visiting holy sites in Iraq to 5,000 a day from the current 1,500.

The daily visits will be part of the package tours for pilgrimage purposes and do not include the flow of other Iranians who travel to Iraq mainly for business reasons.

Talaqani said the deal was almost ready and the sides were keen to have it signed and implemented the soonest possible.

Iranians are now almost the only tourists visiting Iraq and under the new arrangements nearly two million of them will be visiting every year.

It is not clear whether Iraq has the tourist infrastructure in place to handle such big numbers.

There is currently a flurry of construction in the religious cities of Karbala and Najaf, which are the main target of Iranian tourists.

The construction activities are mainly centered on the building of new hotels and other tourist facilities to serve the pilgrims.

Iranians can enter Iraq via several border crossings and via almost daily flights from Tehran and other Iranian cities to the airports in both Baghdad and Najaf.