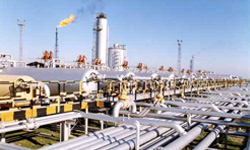 TEHRAN (FNA)- Kharg Petrochemical Complex, a major Iranian petrochem producer located in Kharg Island in the Persian Gulf, has clocked a total petrochemical production of 1.6 mln tons for the current Iranian year (starting March 20th 2008) up 5% over the same period of 2007.

The total sales from petrochemicals recorded during the period touched US$425 mln out of which sales from exports recorded more than US$340 mln, the company’s senior authority said.

Also, nations including China, India, Japan are amongst the leading importers of methanol, sulfur, propane, butane, and gasoline from the Iranian petrochem complex.