US President Barack Obama’s envoy to Afghanistan has said that winning the conflict there will be “much tougher” than in Iraq.

Richard Holbrooke told a conference in Munich: “I have never seen anything like the mess we have inherited.” 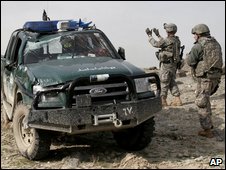 Nato defence ministers at the security conference differed on whether the focus should be military or civilian.

The architect of the US surge in Iraq, Gen David Petraeus, urged measures for Afghanistan similar to those in Iraq.

He warned Afghanistan was likely to get harder before things improved and called for a future change in tactics.

Gen Petraeus, the top US commander in the region, was clearly borrowing on lessons learned from Iraq, the BBC’s Rob Watson reports from the security conference.

In future US forces would live and work more closely with ordinary Afghans. More effort would be made to promote local reconciliation and good government, the general added.

Two US soldiers were killed along with an Afghan interpreter and a policeman when a bomb they were trying to disarm exploded in Helmand Province on Sunday.

The Obama administration is stressing that it is still reviewing its Afghan policy.

But Ambassador Holbrooke told the conference that Washington would be working under the principle that Pakistan and others in the region would have to be part of the solution to Afghanistan’s problems.

The envoy, who is to embark on a tour of the region soon, also said: “It is like no other problem we have confronted, and in my view it’s going to be much tougher than Iraq.

“It is going to be a long, difficult struggle.”

Gen James Jones, the new US national security adviser, told reporters at the conference that a planned doubling in the number of US troops in Afghanistan to about 60,000 was not in itself enough.

“The troops alone will not be sufficient and we have to… engage in the broad spectrum of things,” he said.

“I want to stress that it’s the cohesion of the international effort that has to be better put together in order to be successful.”

America has long been pushing its Nato allies to increase their troop numbers in Afghanistan and UK Defence Secretary John Hutton raised the need for “burden-sharing”, without naming any particular nation.

“Combat forces, that is a most precious contribution right now to that campaign,” he said.

“We kid ourselves if we imagine that other contributions are as important.”

However, German Defence Minister Franz Josef Jung, whose country is a major troop contributor in Afghanistan, insisted that civil reconstruction was as important as the military effort.

He said that Berlin thought its existing troop commitment – about 3,500 with plans to raise the number to 4,500 – was adequate.

The current Nato strength in Afghanistan is approximately 55,000, including US soldiers.

Also speaking at the Munich conference, Afghan President Hamid Karzai repeated his call for elements of the Taleban to return to Afghanistan as part of a process of reconciliation before elections later this year.

This may well be part of Mr Karzai’s own electioneering tactics, our correspondent says.

With his own reputation badly damaged these days, he also launched a strong defence of the Afghan government in front of an audience comprised of many of his critics in the international community, Rob Watson notes.

Although he admitted his government suffered from corruption, he laid much of the blame for the country’s problems on a lack of coordination among the international organisations supposedly trying to help Afghanistan.