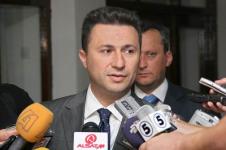 By blocking Macedonia’s Euro Atlantic integration Greece has broken its own promise, made at the Thessaloniki summit in 2003, to help neighbors on their EU path, Macedonia’s PM Nikola Gruevski said Sunday.

Speaking at the 45th Munich Security Conference, Gruevski said that Athens’ good will to settle the dispute was so far only words.

“We are not feeling this good will from your side”, Gruevski said to the Greek representatives present.

At the beginning of the month Greek FM Dora Bakoyiannis blamed Gruevski’s government for raising nationalistic sentiments and provoking Greece with the recent renaming of a main highway to “Alexander of Macedon” after the ancient conqueror, claimed by both nations. She said that such moves hamper the climate needed for settling the row despite Greece’s good will.

“Some names belong to the whole world, not to one or two countries” Gruevski said, adding that he can not understand why Greece sees this as a provocation when the whole world uses the name of this historical figure.

Athens says Skopje’s use of this name implies territorial claims over Greece’s own northern province that is also called Macedonia, and has threatened to block Skopje’s EU accession as well, pending a solution to the row.

With rhetoric from both sides becoming ever more shrill, and the ongoing Macedonian lawsuit against Greece in the Hague International Court of Justice, few see the forthcoming UN talks as a real chance for a resolution to the dispute.