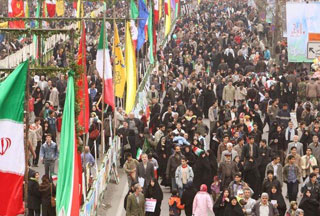 Millions of Iranian on Tuesday took to the streets across the country in support of Iranian progress toward democracy as part of ceremonies marking the anniversary of the Islamic Revolution of 1979. The following is the text of the resolution issued on the occasion:

In the name of Allah, the beneficent the merciful,

The people of Islamic Iran, inspired by the holy Koran, the pure lifestyle of Prophet Mohammad (PBUH) and the teachings of the prophet’s household, mark the thirtieth anniversary of the glorious triumph of the Islamic Revolution with great fervor and enthusiasm.

By their strong presence in the ceremonies marking the “spring of freedom” and by relying on God Almighty, Iran, with great hopes and warmth, welcomes the advent of the 4th decade of the novel history of this ancient land. The passage of 30 years since the bountiful life of the revolution of the Muslim nation of Iran has cemented the roots of this genuine movement in the hearts of lovers of freedom and justice across the world.

The messages of the world’s greatest popular revolution are winning the hearts of those seeking truth and righteousness. Three decades have passed since the exalted architect of the Islamic Revolution and the ever-lasting figure of the contemporary history emerged, yet the memory of that great source of inspiration, lives on in the hearts and minds of Iranians of all ideologies and those with inclinations replete with love for freedom and justice as well as fighting tyranny.

Without a doubt, the memory of that endeared leader will remain etched in the minds of this nation. The revolution going through rough times unscathed is reason enough that one more time that the divine will has left the leadership of this great revolution after the late Imam in the hands of another great personality whose words and vision are the very words and vision of the late Imam.

Marking the 30th anniversary of the victory of the Islamic Revolution in the year that the leader has called the “year of innovation and blossoming” the revolutionary people of Iran, grateful to the infinite blessings of God Almighty for living 30 years of honorable life, once again renew their allegiance with the late Imam, the martyrs as well as with the leader of the Islamic Revolution and hereby announce their stances as follows:

1. Its unique independence, ever-increasing glory, undeniable influence in world and regional developments coupled with praiseworthy accomplishments in all areas have turned the Islamic Republic of Iran in the course of thirty years to a fresh role model for the peoples across the globe. These great successes have been pulled off thanks to the Establishment being ‘Islamic’ and ‘Republic’ in essence and indicate the fact that the path of the faithful Iranians is the only way for the salvage of Islamic communities and the resolution of their problems. The theory of the late Imam Khomeini on the ‘rule of the religious jurisprudence’ on whose pillars the foundation of the Islamic Establishment are based, is the only doctrine for attaining dignity, honor and progress.

2. We deeply believe that ‘Islamic unity and national solidarity’ will provide further momentum toward the sublime aspirations of the Islamic Revolution as it has been in the past thirty years. Hence, we consider unity and national consonance as the most significant requirements of the fourth decade of the revolution. We call upon all officials regardless of their political inclinations and tastes to try and further deepen unity.

3. Owing to divine providence and a sagacious leadership, even the sworn enemies have confessed to the enlightening influence and the power of the Islamic Revolution in the world of Islam as well as in strategic regions like the Middle East, Africa and Latin America in the teeth of all the conspiracies hatched against it. We consider the wave of tendency to Islam and the awakening of the Islamic communities as proof of the spread of the revolution’s ideals and aspirations. In obedience to the late Imam and the leader of the Islamic Revolution, we insist on continued support for the oppressed and for resistance movements in the world.

4. The people of Iran with the slogan of ‘we can’ regard the inspiring achievements of the past thirty years in the fields of science, technology, medicine and defense and especially the launch of the Omid satellite into orbit to be a result of following the principles of the pure Mohammadan Islam, the guidelines of the late Imam and those of the leader of the Islamic Revolution, self-reliance, talent, wise planning as well as the efforts of young scientists and experts. We appreciate the efforts of all those who try their best to promote knowledge in the country and once again emphasize the indisputable right of Iran to accessing nuclear know how for peaceful purposes.

5. We condemn the new wave of divisive plots against ethnic groups and denominations in the world of Islam and stress the need to seriously take heed of the prudent warnings of the leader of the Islamic Revolution and call on world committed leaders, scholars, thinkers and elite as well as the media in the world of Islam to effectively confront these conspiracies and put on top of their agenda maintaining unity among Shiites and Sunnis.

6. The US administration has spared no effort to weaken the Islamic Establishment in the past thirty years. As the late Imam put it, America has been known in the Iranian literature as the “Great Satan”. Its despair in confronting the people of Iran, in its occupation of Iraq and Afghanistan, in its intervention in the Middle East together with the growing hatred toward expansionist policies, have eventually forced America to adopt the slogan of “change”. We stress resistance in the face of any plot, be it soft or hard, and are closely watching any real change in the policies of the “Great Satan” and believe the slogan of “change” will prove right only if occupation and tyranny come to an end in the world and the rights of the people of Iran including their nuclear rights are recognized, its assets are unfreezed, all sanctions are lifted and political pressure eased.

7. We have, in the past thirty years, stressed the liberation of the holy Quds and the oppressed people of Palestine. We regard the rising power of the Islamic resistance in defeating the Zionist army and its supporters in Lebanon’s thirty three day war and Gaza’s twenty two day onslaught as indications of divine aid in fulfilling this sacred goal. We hail the powerful men running Islamic resistance groups in Lebanon and Palestine, especially the popular government of Ismail Haniya and lend strong support to them and appreciate the stances of the great leader of the Islamic Revolution in backing the oppressed people of Gaza. We appreciate the world public opinion’s support for Gazans and condemn the mean stances of some Arab countries regarding the catastrophes in Gaza.

8. The people of Iran, who are themselves victims of international terrorism, strongly condemn the new move of the European Union in removing the MKO from its terror list and urge the Union to promptly change their stance.

9. The people of Iran have been targeted by a wave of plots and schemes of arrogant media in the past thirty years. Now at the beginning of the fourth decade of the Islamic Revolution we stress the need for enlightening the world public opinion by disseminating accurate information on the rightfulness of the Islamic Revolution and the values and brave acts of the Iranian nation.

10. The vigilant presence and steadfastness of the people in confronting threats and plots is the secret behind the growing power of the Islamic Iran. These determining factors, which are signs of religious democracy, will live on thanks to the profound insight of the Iranians into and their loyalty to the aspirations of the late Imam Khomeini and the Founder of the Islamic Revolution, Ayatollah Khamenei, in political, social, cultural, economic and defense areas. Given the current circumstances, the 2009 Iranian presidential election is going to prove to be of epic proportions and indicative of the resolve of the Iranian nation in determining their destiny on their own. The huge turnout in the presidential vote will once again display the true concept of religious democracy.

11-Families of endeared martyrs, we renew allegiance with the aspirations of the martyrs and are grateful to those who gave their lives for the cause of the revolution.

12-Iranians believe ascending to the summits of honor in the fourth decade of the Islamic Revolution, described by the Leader as “the decade of justice and progress”, necessitates wise planning, due attention to the needy and fulfillment of social justice in all areas. We hereby appreciate the invaluable services of the government and underscore all-out efforts by the executive, legislative and the judiciary coupled with all organs precise implementation of the policies envisaged in the fifth comprehensive development plan that the Leader has put forward within the framework of the twenty-year outlook document of the Islamic Republic of Iran. 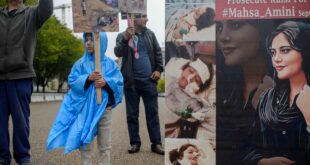