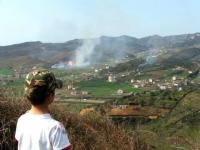 Albanian’s former Defense Minister Fatmir Mediu and several former high officials of the Ministry of Defense are expected to be charged on Wednesday with abuse of power over the deadly blast at army depot outside Tirana last March, sources inside the prosecution told Balkan Insight.

The blast at an army depot in the village of Gerdec, only ten kilometers outside Tirana, killed 26 people, injured more than 300 and over 3000 left homeless. According to the emergency services, 400 houses were totally destroyed, 188 have been severely damaged, 200 sustained major damage and 1600 others were slightly damaged.

The three face from 20 years to life in prison if found guilty.

Estimates published by the Albanian government say the explosion caused more than €15 million in damage to the surrounding area. The explosions began when workers were moving stocks of old Chinese and Soviet shells stored at the base, a central collection point for the arsenal amassed by the communist-era dictatorship of Enver Hoxha.

Albania has been trying for years to dismantle the obsolete arsenal, which was one of the conditions for the country’s successful entry into NATO.