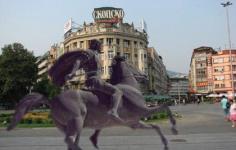 If a Macedonian mayor has her way, the landmark gracing Skopje’s main square would in a novel way bring together two men seen as among the nation’s greateast sons: Alexander the Great mounted on a horse, floating in a fountain to tunes of revered late pop star Tose Proeski

The mayor of Skopje’s Centre municipality, Violeta Alarova, came out with the idea as a possible compromise after the Skopje city mayor complained that instead of erecting a statue of Alexander in the prime downtown location, a statue of Proeski would be more appropriate, and also avoid a confrontation with Greece.

“The fountain will be really nice. It will play music including two songs by Tose Proeski”, Alarova said, as quoted by the local Nova Makedonija daily. She mentioned no deadlines for the project.

Most of the people who left comments on Nova Makedonija’s web site were appalled of the Singing Alexander idea, saying it would be unimaginably kitsch. One reader suggested installing a vending machine on the sculpture’s stand to complete the picture.

No plans were ever made public for the statue, but local media reported it would be some 30 meters in height, higher than some neighbouring buildings. No one has yet officially denied or confirmed its dimensions.

“I am the mayor and I hear this for the first time”, Skopje mayor Trifun Kostovski said after Alarova had told media of her plans.

The origin of the ancient conqueror Alexander is part of the 18-year long name row between Athens and Skopje, a dispute that has come to encompass history, geography and genetics and which keeps tripping up Macedonia’s NATO and EU ambitions.

Proeski, whose boyish good looks and passionate, pitch-perfect delivery made him a regional favorite in the Balkans, died in a car accident in Croatia in 2007. Readers commenting on Nova Makedonija’s site said any connection to the statue plans would be offending his legacy.