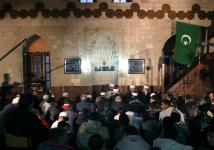 The trial of an Imam (local Islamic priest) on charges of sexually abusing an underage girl in a Bosnian village has stirred up tensions between local media organizations and the country’s influential Islamic Community.

The family of the girl pressed charges against the Imam last year, accusing him of sexually abusing their underage daughter during religion classes. The lawsuit, Bosnia’s first public case of alleged sexual abuse by a religious figure in recent history, was widely reported by local media.

Some TV stations, newspaper and magazines went further and investigated the case, reporting on a further four cases of girls allegedly were abused by the same Imam in the past four years. They carried disturbing testimony from some of these girls and other witnesses, including even one of the Imam’s best friends, who said the Imam had admitted his wrongdoing to him.

The reports triggered strong criticism from Bosnia’s Islamic Community. Last Friday, a three-person TV crew from one of the most popular local programs, Federal Television’s “60 Minutes”, was assaulted by what they said was a group of conservative Muslims. Two days later, a local villager due to testify for the prosecution in the trial, received threats.

Despite the growing public criticism and media pressure, Bosnia’s Islamic Community refused to comment on the trial before the court’s decision, which is expected on Friday.

“Noone has the right to take over the role of the judge, before and above the court, and declare somebody guilty,” the Islamic Community said in a terse press statement on Sunday. However, local media also carried out the comments of Grand Mufti Mustafa Ceric, the leader of the Islamic Community, in one his sermons, in which he reportedly defended the conservative Muslim group and their actions.

Outraged at the lack of any condemnation of the beating, FTV in its evening bulletin said that Ceric “is protecting pedophiles in the Islamic Community as well as hostile Wahabbis, and is openly calling for the lynch of unsuitable journalists.”

This statement angered the Islamic Community, which then demanded a public apology from FTV. Adding fuel to the fire Ceric, visited the village on Tuesday, telling journalists “I have come here to testify that the villagers of Gluha Bukovica are not beasts.”

With increased tensions between villagers, the Islamic community and media, some analysts say that the sex abuse case had become something much bigger, reopening old debates about religious radicalization and the role of religious communities and their leaders in post-war Bosnia and Herzegovina.

The village of Gluha Bukovica had previously gained notoriety from being mentioned in several trials of the International War Crimes Tribunal for former Yugoslavia, ICTY, against Bosniak military commanders. During the war, the village was a base for groups of foreign Islamic fighters who came to Bosnia during the war to fight alongside the Bosniak-dominated Bosnian Army.