US envoy arrives in Afghanistan 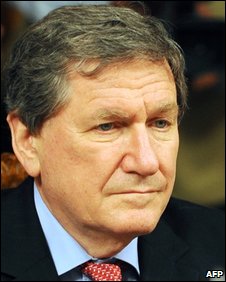 The new US envoy to Afghanistan and Pakistan, Richard Holbrooke, has arrived in Kabul on what is being described as a fact-finding mission.

He is to meet senior Afghan officials to discuss issues including the worsening security situation.

On Wednesday, co-ordinated Taleban attacks in the Afghan capital killed at least 27 people.

President Obama has repeatedly said that Afghanistan’s problems cannot be addressed in isolation.

Some analysts have suggested that Wednesday’s attacks may have been an attempt by the Taleban to overshadow Mr Holbrooke’s visit.

Reports say that in talks with Pakistani leaders he stressed Washington’s financial commitments to the country but underlined the need to purge militant sanctuaries in the north-west region, along the Afghan border.

While in Peshawar, a local politician was killed by a roadside bomb.

After their meeting, Mr Sharif told reporters that Mr Holbrooke said he understood many Pakistanis’ feelings about US drone attacks inside the country.

The BBC’s Syed Shoaib Hasan, in Islamabad, says Mr Holbrooke is being seen as a key player in a renewed effort to reverse the deteriorating situation on both sides of the Pakistan-Afghanistan border.

Mr Holbrooke has said he is in the region to “listen and learn”, before reporting back to President Obama and US Secretary of State Hillary Clinton.

Before his trip the envoy called the situation in Pakistan “dire”.

In letter to American people, Taliban claims it seeks end to war

In an open letter to the “American people,” the Taliban militant group has claimed it …