US: 13 civilians killed in Afghan operation

KABUL – U.S. military airstrikes in western Afghanistan killed 13 Afghan civilians and only three militants, the U.S. said Saturday, three days after an American general traveled to the site to investigate. 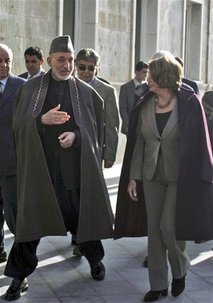 Civilian casualties have been a huge source of friction between the U.S. and Afghan President Hamid Karzai, who has stepped up demands that U.S. and NATO operations kill no civilians and that Afghan soldiers take part in the missions to help prevent unwanted deaths.

A U.S. military statement said the fact that a U.S. general traveled to the western province of Herat to investigate shows how seriously the U.S. takes civilian casualties.

The U.S. rarely releases the findings of civilian casualty investigations, and the disclosure this time could show the effect of Karzai’s criticisms.

The U.S. military originally said 15 militants were killed Tuesday in a coalition operation in the Gozara district of Herat province, but Afghan officials said six women and two children were among the dead, casting doubt on the U.S. claim.

Afghan officials say the group targeted in the airstrikes were living in two tents in a remote area. An ethnic group of Afghans known as Kuchis travel the countryside with livestock and live in tents.

Photographs obtained by The Associated Press from the site showed the body of a young boy — bloodied and dirtied — lying on a white shroud.

In response, Brig. Gen. Michael Ryan traveled to the site to meet with Afghan elders. Investigators found weapons and ammunition at the site, but concluded that 13 civilians were killed along with three militants, the U.S. said.

The U.S. on Saturday released photos of Ryan talking with Afghan elders and hugging a mourning Afghan man.

“We expressed our deepest condolences to the survivors of the noncombatants who were killed during this operation,” Ryan said in a statement. “Our inquiry in Herat demonstrates how seriously we take our responsibility in conducting operations against militant targets and the occurrence of noncombatant casualties.

“Our concern is for the security of the Afghan people. To this end, we continually evaluate the operations we conduct during the course of our mission in Afghanistan and have agreed to coordinate our efforts jointly,” Ryan said.

After increasingly angry demands by Karzai for more U.S.-Afghan military cooperation, the American and Afghan militaries announced plans this month to increase the number of Afghans who will take part in U.S. operations.

The Afghan Defense Ministry condemned the civilian deaths in a statement Wednesday but noted it would take more time to implement the agreement. But it urged U.S. forces to “be very careful during their operations.”

The investigative team’s trip to Herat came one day after the U.N. released a report saying 2,118 civilians died in the Afghan war last year, a 40 percent increase over 2007 and the most in any year since the U.S.-led invasion in 2001 that ousted the Taliban‘s hard-line Islamist regime.

President Barack Obama this week announced the deployment of 17,000 additional U.S. troops to Afghanistan to bolster the 38,000 already in the country to fight an increasingly violent Taliban insurgency. A higher number of troops in the country also means that civilian casualties could increase.