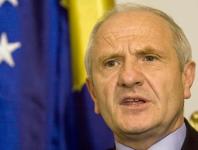 During a visit to the University of Arizona, Kosovo President Fatmir Sejdiu was given its award for “Distinguished Global Leadership” for people who promote international and intercultural cooperation.

In his speech, Sejdiu thanked the United States for its “eternal support” toward Kosovo and took care to thank separately all US presidents George Bush, Bill Clinton, George W. Bush and Barack Obama for their contribution to Kosovo’s independence from Serbia.

“After a strong military resistance and international intervention, Kosovo attained a deep cooperation with its supporters of democratic world”, said Sejdiu. “Kosovo cannot forget its tragedies, but is committed to turning over a new leaf ”.