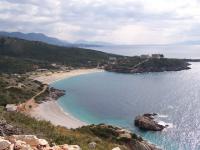 The World Bank chief of mission in Albania, Camille Nuamah, on Wednesday presented the bank’s report on the controversial demolition of a village in southern Albania, blaming the government in Tirana as well as the project coordinator, the son-in-law of Albanian Prime Minister Sali Berisha.

According to the management report, which Nuamah read out loud during the press conference, the demolition of the village was not mandated by the World Bank but by the project coordinator, Jamarber Malltezi, who notified the Bank of his communication with Albanian authorities only after the demolition process started.

An inspection report by the International Development Association, IDA, published by Balkan Insight on January 31, revealed that a project on coastal zones management had contributed to the demolition of several informal settlements in the village of Jale, contravening the bank’s policies on forced displacement. Coordinator Malltezi , Berisha’s son-in-law, was attacked by local media for his role but has denied all accusations of misconduct.

“The appointment of the Prime Minister’s [Sali Berisha] son in law as the Project Coordinator was an unhealthy decision,” said the management report, due to concerns about conflict of interest, which were overlooked.

The World Bank management report acknowledges serious errors in project preparation and supervision, along with errors in communication.

“From basic project management to interactions with the Board and the Inspection Panel, the Bank’s record with this project is appalling,” said World Bank Group President Robert B. Zoellick during a meeting of the board of governors on February 17.

Zoellick has requested the Bank’s Acting General Counsel investigate matters, and has separately referred matters to the Bank’s Department of Institutional Integrity.

“We take very seriously the concerns raised by the Inspection Panel and we are moving promptly to strengthen oversight, improve procedures, and help the families who had their buildings demolished. The Bank cannot let this happen again.”

Albanian Prime Minister Sali Berisha has attacked the World Bank inspection panel as corrupt and tied to an unnamed Albanian construction mafia, arguing that the bank ordered the demolitions and the management report would clear his government’s name.

“The inspection panel has been corrupted on its Albanian side… they put some money in its pockets,” said Berisha in a press conference.

“The inspection panel was in collusion with the construction mafia,” he added, asking the bank to investigate the panel.

Neumah would not comment on Berisha’s allegations, but defended the investigative panel.

“We do not comment publicly on such declarations”, – Neumah said, adding that “the panel is independent”.

Management also unveiled an Action Plan for the demolished area, notably a series of measures to be undertaken with support from the Bank, including a case-by-case legal review of the April 2007 demolitions in the project area, the appointment of an ondependent observer to monitor the legal review and report back to the Bank, and the payment of legal aid for the review of each of the claimants’ cases.

Bank management will also supervise the completion of a social and vulnerability assessment, and the retroactive application of an assistance packages for those affected by the demolitions.

The investigation by the inspection panel found that World Bank management failed to comply with its policies with respect to the design, appraisal and implementation of the project, harming the local people affected by it. The probe also found that WB assisted the demolition by pressuring local construction police to take action and by supplying them with equipment and aerial photos.