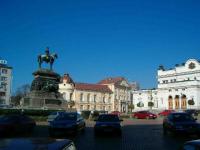 Bulgaria’s economy grew by an annual rate of six per cent in 2008, making the country the fastest growing economy in the European Union.

The annual growth figure was dragged lower by slower growth of 3.5 per cent in the forth quarter, half the rate of growth that was recorded in the last three months of 2007, National Statistical Institute,NSI, data showed on March 11.

The fourth quarter growth figure was slightly figure lower than the 3.6 per cent estimated by the NSI in February in its preliminary estimates.

While more than half the EU’s member states are in recession, Bulgaria has so far avoided the worst of the downturn.

The decline in the rate of growth in the last three months of the year pushed economic growth below the 6.4 per cent targeted by the government for 2008. Through the first nine months of the year, Bulgaria’s economy grew by seven per cent.

Agriculture posted the highest growth, 24.6 per cent, after a bumper harvest, but the sector accounts for only six per cent of GDP. Services accounted for half of the total GDP, growing by 5.9 per cent, while industry posted a three per cent increase.

Consumption, which has been the main driver of economic growth in recent years, posted a 3.9 per cent increase for the year and only 1.4 per cent in the fourth quarter.

For 2009, the Cabinet targets economic growth of 4.7 per cent, a figure criticised as overly optimistic both at home and abroad. The central bank’s forecast is 2.1 per cent, close to the 1.8-2.0 per cent estimated by the European Commission and the International Monetary Fund.