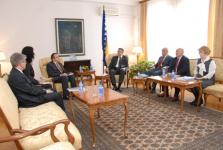 Caught between a worsening economic crisis and the tough reforms required for its management, the government of the Bosniak (Bosnian Muslim) -Croat Federation is increasingly losing the ground under its feet.

In the middle of the ongoing negotiations for a new ‘Stand-by’ arrangement with the International Monetary Fund, IMF, representatives from various war veterans’ associations said they will bring down the federal government if it attempts to reduce their social benefits.

“This (federal) government will be no more, if (social) benefits are reduced by one cent,” media quoted on Tuesday, Mehmed Sisic, the president of the federal association of demobilized soldiers.

Sisic made his statement after various war veterans’ and invalids’ associations held their meeting on the previous day, gathering to discuss and agree upon a joint position on the ongoing negotiations carried out between Bosnia’s state and entity governments with the IMF delegation.

At the same time, Trade Unions demanded from the government to reduce public spending and redirect scarce funds toward the economy.

“The (federal) government is utterly inefficient, as well as the entire state administration,” president of the Syndicate of construction workers, Saban Kadric, told media on Tuesday.

Kadric and other trade unions’ representatives demanded from government to either shape up and do something about the worsening economic crisis, or resign as soon as possible. If not, trade unions predicted an increase in social unrest, in the upcoming weeks and months.

“If they cannot find solutions it would be more honorable from them to pack up and let others work on the predicament,” Kadric said.

Experts say that the improbable demands of the war veterans, trade unions, IMF and other local and international experts have placed Bosnian and especially federal authorities between ‘a rock and a hard place.’

This situation is especially difficult in the Bosniak-Croat Federation. Lulled by ample resources from the newly-introduced Value-Added Tax, local politicians for the past three years have completely halted the reform process and have allowed excessive public spending – ineffective social payments, including raising their salaries, has led their spending to run amok.

Meanwhile the other Bosnian entity, ‘Republika Srpska’ has been proceeding with an aggressive privatization policy which has placed it in a much better position when dealing with the current economic crisis.

As the industrial production and economic growth declined, and unemployment rate grew in the last quarter, governments found themselves in a tough position to maintain social peace, quickly reform, seek out and secure outside assistance, all at once.

IMF, which predicted negative economic growth in this and the coming year for Bosnia, arrived in the country last week and started negotiations about a new ‘Stand-by’ arrangement. After meeting Republika Srpska officials last week, IMF is this week in Sarajevo, where it has ongoing meetings with state and federal officials.

So far, IMF still refuses to spell out the exact conditions for its financial support to Bosnia, but reduced administration salaries and reformed social payment system are changes expected to top the list. Unable to meet those same requirements, Bosnia’s last negotiations with the IMF failed four years prior.

After meeting Federal Premier Nedzad Brankovic on Monday, the head of the IMF mission to Bosnia, Costas Christou, told media that a “decisive package of measures” will be required for a new IMF arrangement, which could include up to 800 million Euros in the first two years. Yet, he still refused to specify which measures would be required, explaining that the IMF first wants to hear the government’s suggestions.

Republika Srpska’s Premier Milorad Dodik, complained to media that Republika Srpska may not get IMF support if the Federation, which is in much worse shape, fails to fulfill IMF requirements.
“The current position of the international organisations is that Republika Srpska alone cannot get that money, which is not fair,” Dodik said. According to the IMF and World Bank criteria, Bosnia and Herzegovina as a whole, and not as separate entities, can borrow money from these international institutions.